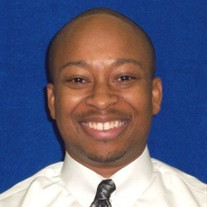 Mr. Robert Brantley Sr. and his wife, Barbara Ann gave birth to their son, Robert Wayne Brantley, Jr on April 10, 1968. He was their second child and the baby brother of a loving sister, Benita. As a child, Wayne was very fun-loving, disciplined, intelligent, and friendly. He gave his life to Christ during his early years. Sadly, at the age of twelve, he and his family suffered a tremendous loss when his Mother passed away. Blessed with a very strong supportive family, Wayne went on to graduate from Cleveland Heights High School in 1986. He earned a Bachelor of Arts Degree three years later from Baldwin Wallace College and a Bachelor of Science Degree in Mechanical Engineering from Case Western Reserve University in 1991.

On May 26, 1995, Wayne married Shandale Elizabeth Cooper in Cleveland, Ohio. They gave birth to Tania Brianne, Robert Wayne, III, and Sydni LauRen. As a focused and ambitious family man and professional, Wayne worked very hard through the years and was promoted many times. As new career opportunities came his way, Wayne and Shandale relocated their family to various locations around the country. Their adventures included stops to Newark, DE, Euclid, OH, Canton, MI, Athens, GA, Grand Island, NE, and Victoria, MN.

In addition to all these achievements, he managed to squeeze in an Executive MBA Degree from the University of Michigan in 2009.

Wayne's love for God and commitment to serving others were apparent in everything he did in life. He served as Pastor of Christ's Servant's Mission Church in the basement of his home in Euclid, Ohio. He was also appointed to the role of Elder for Athens Church, in Athens, GA. Wayne also served on the Board of Directors of the American Red Cross for the Northeast Georgia Region.

Some of Wayne's greatest joys came from planning time to get away to vacation with immediate and extended family and friends. His vacation plans became well known for their ability to connect so many people in fun-loving and enjoyable events. They became known as "Wayne Brantley Productions". They were the highlight of every year and a reflection of God's love and beauty in his heart.

In October 2013, Wayne developed Acute Myeloid Leukemia (AML). He battled the illness with great faith, love, strength, and determination. He spoke well of his testimonies of God's grace and mercy, even during many treatments and procedures.

The family prefers that those who wish may make loving contributions in his name to the Leukemia & Lymphoma Society, 1711 Broadway Street NE, Minneapolis, MN 55413.

Funeral Services will be held Saturday, March 14th at 1 PM in Plymouth Church of Shaker Heights, 2860 Coventry Rd., (at Weymouth Rd.), WHERE FRIENDS MAY CALL ONE-HALF HOUR PRIOR TO THE SERVICE.


PDF Printable Version
To order memorial trees or send flowers to the family in memory of Robert Brantley, please visit our flower store.