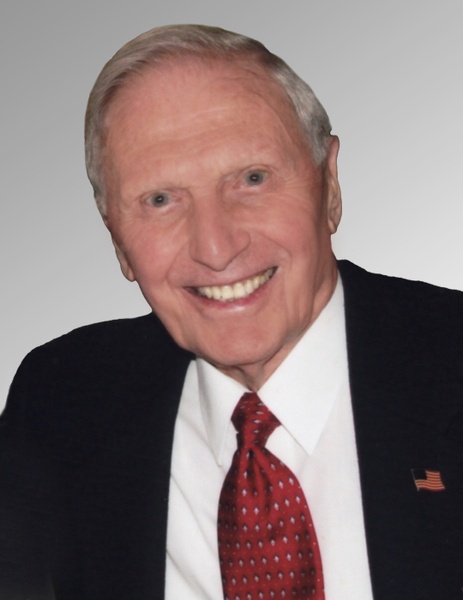 Former Cleveland Heights, OH, Mayor, real estate industry standout, and esteemed community leader, Robert Henry “Bob” Arnold, passed away on May 10, at Judson Park in Cleveland, OH, only 5 days after the loss of his beloved wife of 78 years, Jean. The cause of death for both was complications from COVID-19. At the time of his death, Bob was a newly-minted centenarian; his socially-distanced relatives’ celebrations were chronicled on Channel 5 TV news.

Bob was born in Medford, MA on April 12, 1920; his mother, Rose, was a talented artist who was an original potter for Paul Revere Pottery, as well as an art teacher, master weaver, city councilwoman, and an active volunteer. His father held a deep love of country, was an aficionado of classical music and the fine arts, and had an entrepreneurial spirit fueled by a strong sense of personal accountability and fair play. Following WWI, the elder Mr. Arnold served in the new Foreign Trade Bureau, first in Washington, DC and then in New York City. Later he accepted a position as a grocery store General Manager in Norwood, MA (a Boston suburb) when Bob was 6 years old.  Norwood then became the family’s permanent home.

Bob was very much his parents’ child. From them, he learned the importance of a deep sense of family and of showing respect to others, especially elders. While Bob never felt that he had an artistic bent, he clearly was the product of his parents’ genes as exhibited in his intellect, values, virtues, drive, generosity, business acumen, and community leadership.  He ultimately passed onto his two children, Judith and Jeffery, the importance of integrity, compassion, and of giving back to the community and making a difference in life. One of the greatest lessons Bob learned from his childhood was, “Your word is your bond…without honesty, without integrity, you have nothing….” Anyone who had any business or interpersonal dealings with Bob could certainly attest to the importance of this belief in his life.

Bob was athletically gifted and at Norwood High School, he participated in baseball, basketball and other team sports.  Since, however, he felt his first obligation was always to his family and helping out at the store, Bob’s sports practices and relationship with his coaches were frequently stressful.  Ultimately, he decided to focus on individual sports, earning the #1 berths in track and tennis. Despite the demands and intricacies of balancing sports, academics, and helping out with the family’s store, Bob maintained the top ranking in his class and graduated Valedictorian in 1937. He also managed to find time to achieve Eagle Scout distinction!

In his senior year at Norwood High, Bob applied to Amherst College, but realized that he would need not only a scholarship but also several jobs to subsidize his studies and not be a burden to his family. The Great Depression was a painful one for Bob’s family, as a considerable number of their grocery store customers took home their food needs on credit, with some never able to pay off their debt. By the late 1930s, the store was no longer viable for Bob’s family to maintain. Bob was successful in not only receiving the Amherst scholarship but undertook a multitude of jobs, while also posting top grades. He also did very well in tennis, wrestling, and track.

Life changed in 1940, when Bob, an Amherst senior, ended up taking the sister of a pledge in his Phi Delt fraternity, George Hackett, to a football game they both were eager to attend. Jean Hackett was completing her studies at Bradford Junior College (top in her class) in Bradford, MA and preparing to enter Smith College.  As Bob would later recall, “there was a real affinity right from the start.”  It was a whirlwind romance and Bob “pinned” Jean just before he graduated Phi Beta Kappa in June,1941, majoring in both French and Italian.

The two were married January 2, 1942, shortly after the attack on Pearl Harbor.  Bob had been notified in December ‘41 by the Norwood draft board that his services were required right away. Since the wedding invitations had already gone out, Rose Arnold, displaying the gumption that would later become one of Bob’s hallmarks, marched into the local draft board to explain the upcoming wedding plans, assuring them that Bob would begin serving as soon as he returned from his short honeymoon. Amazingly, the board agreed to that plan!  Bob did as promised and subsequently went to basic training, with his new wife, Jean, joining him at several training camps.  Bob attended Officer Candidate School and was deployed as a Lt. in the Infantry in May 1943, first to North Africa, then to Italy, ultimately serving as a Major in General Eisenhower’s Intelligence Unit, putting his fluency in French and Italian to good use.

Meanwhile, Bob’s wife, Jean, gave birth to their daughter, Judith, who arrived a month early on December 31, 1943.  While Bob was on the European war front, Jean lived in Cleveland Heights with her parents, who helped to raise their granddaughter.  Jean’s father, Hunter Hackett, wrote to Bob when he was in Italy saying that, if Bob chose not to pursue the job he had been offered with GE in NY upon his return, Hunter would like Bob to consider joining his real estate firm as a salesman in Cleveland Heights, then named Hackett & Criswell.  Bob liked the idea of real estate because he realized that he could be somewhat independent as a salesman and potentially successful if he worked hard and did a good job. When Bob returned stateside after World War II as a Lt. Col. in 1945, he decided to live in Cleveland Heights and join Jean’s father as a new salesman.  Bob also joined the local National Guard as a Lt. Col. and served for more than a decade.

Bob’s performance in residential real estate in his first year made him one of the firm’s top salesmen.  When Dick Criswell left the firm shortly thereafter, Hunter asked Bob to become junior partner.  While Bob considered that he could earn more as a salesman than as a junior partner, he felt that the challenge of management and of helping to expand the company as Hackett & Arnold was appealing.

Bob’s achievements catapulted his career, the company’s growth, and both his and the company’s reputations for integrity, fairness, transparency, and leadership. Bob became very involved in establishing a second office further east in the suburbs, helping to negotiate or finalize contracts, and working with his brother-in-law, George Hackett, who had also joined the firm.

When Bob and Jean became empty nesters with both of their children in college in the mid-1960s and into the 1970s, they became particularly active in the community as volunteers. Bob served on the Board of the Cleveland Area Board of Realtors, including the role of President – a pattern he followed with the Ohio Real Estate Association. Bob also served on the National Board in multiple capacities, perhaps most notably as head of the Legislative Committee. Always well organized, Bob proved able to think well on his feet, and was an eloquent and engaging speaker in business and civic pursuits.

Bob was enthusiastic about serving his community and did so in Cleveland Heights’ city government, holding positions as Councilman, Deputy Mayor, and Mayor for a supposedly nonpartisan Council.  According to a Councilman who served with him, there was, indeed, some partisanship as well as very tough situations, but diplomatic Bob was able to resolve disagreements amicably and to forge satisfactory and effective compromises.  The Councilman further said that he “never heard a bad word or criticism of Bob Arnold’s leadership and ability to work well with everyone.”

When Bob retired from Hackett & Arnold in the 1990s, after a memorable cruise around the world with Jean, her brother, George Hackett, and his wife Phyllis, he was loathe to remain anything but active and dedicated.  He enjoyed his growing family, ranging from his daughter, Judith F. Arnold and son, R. Jeffery Arnold, to Jeff’s two children (Bob and Jean’s grandchildren), Christine and Stephen, and their own children – the senior Arnolds’ 5 great-grandchildren: Ryan, Anna, and Logan, born to Christine Arnold Fruewirth and husband, John, and Liam and Sasha Arnold, the children of Stephen Arnold and wife, Farrah. Other family members for whom Bob and Jean cared deeply included George and Phyllis Hackett (both of whom predeceased Bob and Jean) and their two children, Carrie Hackett Gaul and son Jim, and Bruce and Judy Hackett and their daughters, Emily Hackett Reaves (and husband, Mikey) and Rachel, plus other extended family and friends

The Robert Arnolds were always generous, interested, smart, witty, and good listeners.  Most of the kids benefited in some way with homework help and/or sound advice.  Bob also coached wrestling, and gave his time and effort to any of the Hackett family members in need, as well as friends who were also “part of the family.”  Bob’s father passed away in the 1970s; his mother Rose decided to move to Judson Park in the 1980s to be near Bob (the only son) and family members in Cleveland. She passed away in the early 1990s.

In his retirement, Bob fit in some other challenging activities, including taking courses to become a certified gemologist and also a paralegal.  He also had a secret recipe for making delicious vinegar cookies that everyone craved.  He was an amazing man who made his wife and people happy, and who “always excelled in every endeavor he undertook and had the most captivating, beautiful smile,” as Jean had written on his 90th birthday.

Bob and Jean moved to Judson Park (just 3 blocks west of their Cleveland Heights home of 50 years) in 2012.  They remained in Independent Living at Judson Park until the very end with Jean devoted to caring for her soul mate – cooking, washing, light housekeeping, and shopping (before virus restrictions).  Sadly, Jeff Arnold predeceased his parents in 2014, leaving his widow, Susan Eastridge, of 20 years.  Former Army Reserve Captain Judith Arnold carries on her parents’ love of life, sense of civic duty, entrepreneurial excellence, and commitment to making the world a better place for all – people, animals, and the environment – from her home in New Jersey.

United in death as they were in life, Bob and Jean, were cremated and are interred at Cleveland’s Church of the Covenant’s Columbarium.  While they lived long, productive lives as role models for everyone who knew them, they will be sorely missed by family and friends alike.  There will be a private memorial service at the family’s convenience after the virus restrictions are lifted.  Memorial contributions can be made in one or both Jean and Bob Arnold’s name to:  the Church of the Covenant (Covenant Cache Fund), 11205 Euclid Avenue, Cleveland, OH 44106; or the United Way of Greater Cleveland, 1331 Euclid Avenue, Cleveland, OH 44115; or the Greater Cleveland Food Bank, 15500 S. Waterloo Road, Cleveland OH 44110.