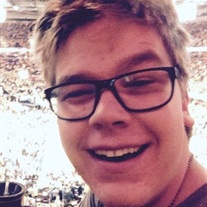 Rin Gill-Eldridge passed away on June 23rd, 2016 surrounded by his family in Cleveland, Ohio.
Rin was born March 3rd, 1994 in Athens, Ohio. Athens has always been a second home, a loving community of friends kept close to his heart.

Rin's friends and family enjoyed his gifts of wit and intelligence, expressed through wisecracks, observant conversations and vivid prose. Rin was talented in all things musical, particularly voice. His drawings convey a truly unique aesthetic and an eye for peculiarity in all things.
Rin's gentle spirit could make him shy, but rewarded those who grew close to him. Animals always found a friend in him.

Rin was enrolled at Cleveland State University and was interested in philosophy and law. His ultimate goal was to use his talents and experiences in the service of others.

Rin is dearly missed by his loving mother and stepfather, Kate Gill and Johnbuck Creamer, and dear brother Emmet; as well as father Jim Eldridge, brothers Saxon and Sebastian Eldridge; grandparents Maureen and Bill Gill, and Suzanne and the late Buck Creamer; uncles Billy, Charlie and John Gill, and Rosie Creamer and Jeff Rand; and the extended Gill and Creamer families near and far.