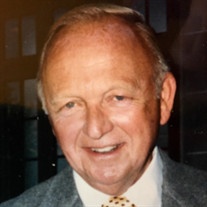 Richard Peter White "Dick" at the age of 92, died peacefully surrounded by his family on December 31st in the afternoon at home in Waite Hill. Son of Evelyn Peter White and Martin White, Dick is survived by his devoted wife of 67 years, Polly White (nee Bruch) and his three loving girls, Cynthia White Halle, Margaret Helen White and Shirley Evelyn White. His two granddaughters, McKinley Bruch Sanders and Portia Osborne Sanders were the most special to him! Born and raised in Cleveland, Ohio Dick graduated from University School in 1943. He enlisted with the Army Air Corps for two years and was stationed in California until the war ended. He began working for his father's company, White Bros. Co., as a manufacturer's agent for plumbing supplies, along with his two brothers, Martin and Harry White. Eventually his nephews and other family members were all a part of the team. His sister, Shirley Hartman Reid, also survives him.

Anyone who knew Dickie understands that his favorite times were spent on his tractor mowing the fields on his Waite Hill property! He was also an avid collector of antique cars and loved being with his family. Dick was a hard working man who devoted himself to Polly and his girls. He had a dry wit, clever sense of humor and loved living life on his terms. He adored all of his animals over the years especially his labradors who traveled many miles with him and Polly driving back and forth to Fort Lauderdale, his other favorite spot on the planet. As he would always say, there are only two places to be, Cleveland, Ohio and Fort Lauderdale, Florida!

He belonged to the Kirtland Club and the Lauderdale Yacht Club. He lived in Fort Lauderdale during the winters.

A party will be held in the spring at home in Waite Hill on Friday, May 26th at 5 PM in traditional "Dick style" with tractors and an illegal bonfire!