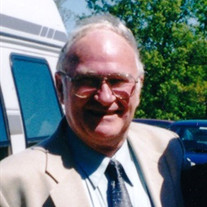 Richard Dale Saurwein was born in Cleveland, Ohio on February 23rd 1941 to Dorthy and Val Saurwein. He grew up in the town of Pepper Pike, Ohio with his parents, his brother Thomas and two sisters, Ann and Susan.

Richard attended the St. John's Northwestern Military Academy, and subsequently enlisted into the United States Navy. While he was in the Navy he served as a Submariner on the last of the diesel powered submarines, and the first of the nuclear powered submarines. The vessels he was proudly assigned to were: USS Trout (SS-566) and USS Chivo (SS-341). Richard served as an Internal Communications Specialist, attained the rank of Petty Officer First Class (E-6), and was discharged honorably.

Richard met Cheryl Lynn DeRussy while they were both members of the First Baptist Church Choir. They were married on June 1, 1974, worked together to build their own house, and had their child Daniel on December 28, 1981.

After exiting the Navy, Richard worked for Harshaw Chemical Company and Case Western Reserve University before being hired as an Engineer at Superior Die Casting. He spent the majority of his employment career at Superior Die Casting, and was instrumental to everyday operations as well as the eventual modernizing and computerization of the factory.

Even during retirement Richard was not content to stop working, he could now focus more of his time towards the recording of pipe organ music. His passion had always been pipe organs, and he began Com Sec Recording to allow him to use his skills for that endeavor. Richard continued to work with his gifts and passion until his passing, all while developing his love for cooking, enjoying nature and conversation with friends, and bringing joy to others' lives through gifts, thoughtfulness, and humor.