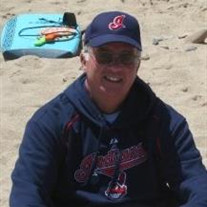 Richard Allen Hiles was the beloved husband of Stefanie for almost 50 years, the devoted father to Paul (Jill), Robert (Katrina), and Ben, and doting grandfather to Quinn, Paige, Rebekah, and Michael. He was a loving brother to George (Judy) and caring uncle to four nieces and their families.

Rich was devoted to his church. He served on numerous committees and was a teacher for children and adults. He was a Eucharist minister, visiting the homebound. He loved cooking and served as part of the cooking crew on youth mission trips.

Rich was a volunteer at Holden Arboretum, helped with a garden at the Boys and Girls Club on Broadway, and worked on a crew that built or remodeled houses for Habitat for Humanity. While Rich loved gardening, birding, and cooking, his greatest love was for baseball. He was a devoted fan of the Cleveland Indians and a season ticket holder since 1994. He had attended every opening day since 1986 - rain, snow or shine!

To order memorial trees or send flowers to the family in memory of Richard Hiles, please visit our flower store.