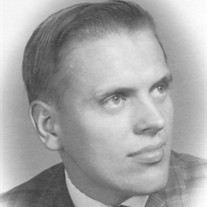 Richard Gibbons was born in Cleveland in 1938. He graduated from Shaker Heights High School and attended Ohio University where he majored in electrical engineering. He was honorably discharged from the Army in 1963.

Richard enjoyed music. He was treasurer of Phi Mu Alpha and was the only member who was not a music major. He sang with the Ohio University Men's Glee Club, the Philharmonic Chorale, the Cleveland Orchestra Choir, the Plymouth Church Choir and The Hillcrest Barbershop Quartet.

He volunteered at the Mount Pleasant Community Center. Richard enjoyed biking as a member of American Youth Hostel. He toured much of the United States and enjoyed a trip to the Holy Lands.

He was a board member of Hill House, a center to help people with emotional illness return to normal living through social activities and other services. He was president of Operation Crossover, a social group for members of Hill House.

Richard lived in Peninsula at Northampton Meadows, a group home where he was sometimes used as a driver. He was an avid reader and follower of math and science. He had an extensive library.

Richard was a giving person who loved to shop for bargains. He gave his finds to family and friends. He tried to be a good son, brother, and uncle, and he was. Richard will be greatly missed.

The family prefers that those who wish make contributions in his name to Wayside Farms, 4557 Quick Rd., Peninsula, OH 44264.


PDF Printable Version
To order memorial trees or send flowers to the family in memory of Richard Gibbons, please visit our flower store.