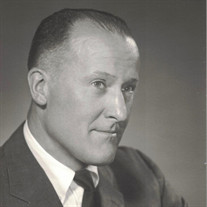 Richard Wellman Clark, born October 17, 1924, in Woodbury, Connecticut. He was one of three sons of Dorris and Leland Clark. Dick spent his early years in Connecticut and attended Avon Old Farms School. Then, during World War II he was an Air Force Navigator. After graduating from The College of Wooster in Ohio he settled in northern Ohio working in the banking industry. He met Ellen Veronica Wollaeger and the two were married on September 17, 1955.

Dick and Ellen started their married life in the eastern suburbs of East Cleveland and Cleveland Heights. Eventually, his work pulled them to the westside suburb of Strongsville where they lived for nearly 40 years. They enjoyed many outdoor activities such as tennis, golfing, hiking, jogging, swimming, and gardening. Dick and Ellen shared their lives together with dedication to each other and their Dalmatians. In September of 2016, they celebrated their 61st wedding anniversary. Richard is survived by wife Ellen.

The family prefers that those who wish may make contributions in his name to a charity of choice. Services private.