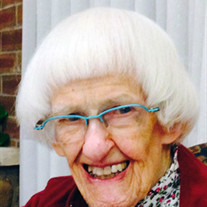 REBECCA P. MOORE (nee Perkins) passed away peacefully at the age of 95 at 8:40 pm on Sunday, February 15, 2015, after a very short illness. She went gently, as if to sleep, with no pain or discomfort and with family holding her hands. She was independent and curious up to the end. A lifelong symphony subscriber, she had attended a Cleveland Orchestra concert the night before becoming ill with an acute infection and died three days later.

Rebecca was the beloved wife of the late Ralph H. Moore, and is survived by her adult children, Roland T. Moore (Jane Donnell) of Cleveland, OH, Rosalie "Rosie" Moore of West Vancouver, BC, Canada and Kent, OH and Ruth E. Moore (Kenneth Keating) of Austin, TX. Predeceased by her parents, four siblings, and aunts and uncles, she is also survived by generations of nieces and nephews, and other extended family.

She was born Rebecca Armstrong Perkins in Wooster, Ohio, on March 2, 1919, the youngest daughter of five children, to Albert Edward Perkins and Edith Rebecca Armstrong Perkins. She graduated from Wooster High School in 1937, from the College of Wooster in 1941 with a Bachelor of Arts degree in History, and received her teaching certificate from Kent State University in 1942, after which she started her first teaching position with fourth-graders in Columbia, Ohio. For the next four summers, she worked on a Bachelor of Science degree in Music Performance at Kent State University, studying piano with Harold Miles.

In 1946, she started teaching music in Lakewood, Ohio, and in 1948 at schools in Lorain County, continuing her studies at Kent in the summers. It was while teaching in Lorain County that Rebecca Perkins met the other music teacher in the system, Ralph Howard Moore. They saw each other and chatted at teachers' meetings and school events. In the spring of 1949, Rebecca had two tickets to hear the Cleveland Orchestra, and at the school secretary's suggestion, she asked Ralph to accompany her. That was their first date.

They each continued teaching music in Lorain County and started dating more frequently, going to movies, concerts and recitals, and singing together in the Cleveland Orchestra chorus (Beethoven's Ninth Symphony). Rebecca continued her graduate studies at Kent State during the summers of 1950 and '51 while Ralph returned to work at a boys camp in upper New York State. In the fall of 1951, Rebecca started teaching music at North Ridgeville, Ohio, and Ralph returned to Case Western Reserve University to continue his graduate studies.

On September 8, 1951, Rebecca and Ralph were married in Wooster, Ohio - at the ages of 32 and 39, respectively, considered old at the time - and then honeymooned at Lakeside, Ohio. They moved around a good bit during the early years of their marriage, while both were teaching and/or studying: Houghton College and Camp Agaming, New York; Maryville College, Tennessee; Wooster, Ohio; Jefferson City, Tennessee; and Columbus, Ohio. In August 1955, they welcomed their first child, Roland, in Wooster, Ohio. Rosie was born in Maryville, Tennessee in August 1958, and Ruth joined the family in February 1961 in Columbus, Ohio

In 1962 the family settled in Marysville, Ohio. Ralph was teaching instrumental music at local rural schools. At first, Rebecca stayed home to care for her three young children, but in 1963, she returned to teaching at two of Marysville's elementary schools. The following summer, the young family purchased their first home and Ralph started teaching instrumental music at the Marysville Junior High School. They also purchased a piano and Rebecca tutored private piano students in their home after school. Since they had summers off, they started the tradition of taking a road trip every summer, traveling as a family to the Great Smokey Mountains, Washington DC, Niagara Falls, and most remarkably, all the way from Ohio to Los Angeles, California in a Rambler American with three kids in the back seat and a Naugahyde luggage rack on top!

This comfortable family life was interrupted when Ralph's teaching contract was not renewed. In the fall of 1968, the family moved to Streetsboro, Ohio, where Rebecca taught elementary music for Streetsboro City Schools and Ralph attended Kent State University to work on a Master's degree in Library Science.

Ralph and Rebecca's house purchase in Streetsboro would be their last. The three children all graduated from Streetsboro High School, Roland in 1973, Rosie in 1976, and Ruth in 1979. Rebecca continued teaching music in Streetsboro until she retired in 1982. Ralph held various positions at first, but landed for the final decade of his work life as a custodian at McDowell Elementary School in nearby Hudson until he retired in 1983. Although both Ralph and Rebecca worked hard at their careers, Rebecca's teaching employment was more stable and, therefore, she was commonly the primary bread-winner of the family.

During retirement Rebecca and Ralph continued to enjoy road trips by car, and went every summer to coastal Maine to stay with their good friend Bernie Goodman, made multiple trips to visit each daughter (Ruth in Austin; Rosie in New Orleans, Nevada and Vancouver) and to annual Kiwanis conventions. They took their first plane flight in the summer of 1981 to visit Rosie at her thesis area in SW Utah, after which they continued vacations by both car and air. They also took a cruise to Alaska in 1993.

Besides working and raising their family, Rebecca and Ralph were always active in their churches and their communities. In Marysville, they were active members of the First Presbyterian Church, and in Streetsboro at the United Methodist Church, sometimes as choral directors or substitute organists, but almost always as singers in the choir. Since the late 1970's they were active members of the Kent United Church of Christ where they especially loved the quality of the music program. Rebecca was an active lifetime member in the Delta Omicron Musical Fraternity (since 1972) and Ralph was a lifetime member of the local Kiwanis Club.

Ralph passed away in 1999 in Streetsboro, sixteen years after retirement. His last few years required Rebecca's nearly full-time care. In 2001 Rebecca sold the Streetsboro house and moved to Judson Park Retirement Community in Cleveland, where she started a new life - and thrived! While her marriage to Ralph spanned 48 years of loving partnership, her marriage was both preceded and followed by over a decade of brave, single, independent living for Rebecca.

While at Judson she volunteered both onsite - at the reception desk, as Third Floor representative on the Residents Association, on the Transportation Committee, and in the Mail room - and offsite, mostly at the Cleveland Music Settlement as a classroom volunteer for pre-school, where she was named Volunteer of the Year in 2012.

Rebecca had many hobbies. She was a nature lover, learning the names of many trees, flowers and birds as a young girl and retaining and extending this knowledge throughout her life. At the Streetsboro house, she dutifully provided ample seed and suet on the back porch feeding stations to sustain the birds throughout the winter months, and allowing for constant viewing opportunities. Rebecca was an avid thread/yarn crafter from the time she was a young girl and always had at least one sewing, knitting, or crocheting project going. She also learned gardening early on and continued tilling, sowing and tending large family vegetable and flower gardens throughout her life. Nothing will ever rival the taste of Rebecca's home-grown tomatoes! She cherished animals (except snakes!) and loved her own (and everyone else's) many family pets (both dogs and cats). She had a very good sense of direction and knew local (and even more distant) geography "like the back of her hand". Outdoor activities that she enjoyed at various times in her life included hiking (esp Smokey Mountains), biking, swimming, tennis, long walks and badminton. At Judson, she took up Yoga and adored her twice-weekly class, keeping up her practice with daily stretching exercises. Until the end of her life, Rebecca enjoyed the game of Scrabble, playing weekly at Judson, which was quite a diminishment of her nightly game of Scrabble with Ralph for much of their marriage.

Rebecca loved to travel! After she gave up driving (at 90) Roland and Jane provided taxi service for her errands, and countless opportunities for Rebecca to travel locally and in surrounding states (Rebecca was embraced by Jane's extended family and loved holidays spent with them). Rosie took her on excursions and road trips in NE Ohio and further afield in the US (Tennessee, NY and a Christmas trip to see Ruth in Texas) and also organized her visits to Vancouver where other destinations were gleefully gained (Vancouver Island and Canadian Rockies). Rebecca's last trip afar, to visit Rosie in Vancouver, was in Sept 2014.

Rebecca was an avid reader and did not allow her failing eyesight to hamper her enjoyment of reading a good book. Nor did she let her diminished hearing prevent her from going to symphony, listening to the radio or engaging in conversation. She also became increasingly dependent on her walker for support while getting around. Rarely complaining of these "handicaps", Rebecca continued to live her life, her way - independently. She just kept going - all the way to the end.

May we all carry our torches forward with a spark of Rebecca's spirit of gentle grace, love, bravery, curiosity and tenacity.

Suggested donations in her name to The Cleveland Orchestra, Severance Hall, 11001 Euclid Ave., Cleveland, OH 44106, www.clevelandorchestra.com to honor her love of music, or to The Judson Foundation, Judson Park Annual Fund, 1890 East 107th St., Cleveland, OH 44106, www.judsonsmartliving.org/support-judson / to honor her love for the community where she lived and thrived since 2001. A Memorial Service will be held Wednesday, February 25th at 4 PM in the auditorium/chapel of Judson Park, where visitors are asked to use valet parking at the Chestnut Hills entrance (1801 Chestnut Hills Dr.) or the parking garage at 2181 Ambleside Dr., Cleveland.


PDF Printable Version
To order memorial trees or send flowers to the family in memory of Rebecca Moore, please visit our flower store.