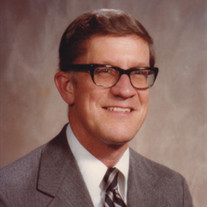 He was the former Senior Vice-President and Group Executive of the General Electric Lighting Business Group in Cleveland, Ohio. He was born in Binghamton, NY on May 6, 1926 and served as an officer in the US Navy in World War II.

He attended Columbia University and Tufts University and received BNS and BSME degrees from Tufts. He joined the General Electric Company in Schenectady, NY in 1947 and advanced through assignments in the induction motors, jet engine and computer businesses. In 1973 he was appointed General manager of the Large Lamp Department in Cleveland, and in 1979 was named Group Executive of GE's Lighting Business Group. He held this position until he retired in 1987. After retiring he continued his involvement in both businesses and community interests.

He served on the Board of Directors of several companies including Thomas Industries, Pacific Scientific, and Crescent Electric Supply. He was an active parishioner at The Church of St. Dominic in Shaker Hts. and a past Vice President and Trustee of The Musical Arts Association among his many community activities.

He is survived by Vera, his dear wife of almost 68 years, a daughter Rebecca Howard (Thomas) of Windham, NH and sons Mark D. (Pamela) of Longboat Key, FL, John S. (Fern) of Cincinnati, OH, Paul R. (Nancy) of High Point, NC and the late R. David (May 16, 2008). He was the dear brother of Malcolm (Kathy) and sister Carolyn McFall (Ted). He was blessed with twelve grandchildren and eight great grandchildren.

Memorials may be made in his name to the Vera and Ralph Ketchum Educational Endowment Fund, The Church of St. Dominic's School, 19000 Van Aken Blvd., Shaker Hts., OH 44122 or to St. Jude Children's Hospital, Memphis, TN.

A Funeral Mass will be held at The Church of St. Dominic, Monday, June 8th at 10 AM. Interment will follow in Lake View Cemetery.


PDF Printable Version
To order memorial trees or send flowers to the family in memory of Ralph Ketchum, please visit our flower store.