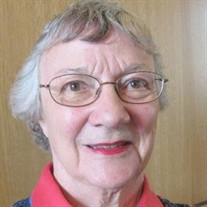 "Prue" graduated from Chatham Hall in 1946 and Wellesley College in 1950. She was President of the Women's Committee of Cleveland Museum of Natural History two times and Trustee of the Museum from 1974 - 2013. "Prue" served twelve years as an active participant and the remainder of years as an honorary member. She also served four years during the 1960's for the Garden Center of Greater Cleveland. In addition, "Prue" served the Benjamin Rose Institute from 1975 through 1979.

"Prue" worked with the Garden Club of Cleveland from 1959 - 2006. In addition, she was on the Junior Council for the Cleveland Museum of Art from 1957 - 1967. Other interests and involvements were serving on the Women's Advisory Board of the Historical Society from 1957 - 1960. She was a part of the Fairmount Evening Circle (young member's guild) 1953 - 1960. "Prue" was on the steering committee as Natural History liason when Shaker Lakes Nature Center was built.

The family prefers that those who wish may make contributions in her name to Cleveland Museum of Natural History, 1 Wade Oval, Cleveland, Ohio 44106-1767 or Chatham Hall, Chatham, Virginia 24531.

Memorial Services will be held at Fairmount Presbyterian Church, 2757 Fairmount Boulevard, Cleveland Heights, OH 44118 on Tuesday, April 11 at 4 PM. For further information, directions and to sign the guest book log online to:


To order memorial trees or send flowers to the family in memory of Priscilla Garretson, please visit our flower store.