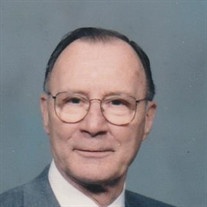 Believe it or not here are two members that were married at Heights Christian in 1949-Sixty nine years ago, and they were known for actively greeting folks every Sunday morning for many years before the worship services. Shirley comes by the Disciple faith through her family heritage. Her father, Daniel E. Moore was an active lay member in the Disciple Church and her uncle was a Disciple minister. Paul however is a convert. He grew up in the Methodist Church where his mother was a soloist.

Let's start at the very beginning of these very interesting and rewarding lives. Shirley was born in Altoona, PA and was an only child. Paul was born in Albany, New York and moved to Columbus, OH when he was 6 months old. His father was a sales representative. When Paul was in high school during World War II, he enlisted in the U.S. Air Force and remembers the motto: "You too can wear a pair of silver wings". Paul jokingly says, "When the Germans heard I was coming, they gave up". They soon closed Pilot Training School since there was no longer a need for more pilots. But Paul did learn to fly a Piper Cub. When Paul's stint in the Air Force ended in 1945, he came home and enrolled at Ohio Wesleyan where he majored in Political Science, joined Delta Tau Delta fraternity and was on the swimming team. He was also house manager of his fraternity, so he could get free room and board. It was at Ohio Wesleyan that he met Shirley and they became college sweethearts. Shirley graduated in 1948 and Paul graduated in 1949. They were married in 1949 at Heights Christian Church by Dr. Waymon Parsons.

Their first home was in Warrensville. Their family began to grow. They adopted David in 1956 at 3 months of age and Beverly in 1959 at the age of 6 months. Just five years after they were married, Shirley's father died suddenly. It was decided that Irene, her mother, at age 49, would come to live with them. They moved to a larger home on Stoer Road in Shaker Heights in 1967. Paul, after college, became a supervisor for U.S. Truck Lines followed by employment as Director of Purchasing for the Higbee Company. He then moved to Apex Paper Box Company where his talents were soon recognized. After several years, he was promoted to Vice President. In January of 1990, he joined Shirley in retirement.

During the time that they lived in Warrensville, Paul and Shirley began to attend Aldersgate Methodist Church where Rev. Bob Raines, a dynamic preacher, was the minister. Paul became active in SHEP (Southeast Heights Ecumenical Parish) where congregations elected representatives to come together to address community issues of racism and poverty. Dr. Al Pennybacker, minister of Heights Christian Church, was leading this group in their visionary work; therefore, the Hummel's got to know him well. When Dr. Raines left Aldersgate, the Methodist Church rotated several ministers through that pastorship. One Sunday, tired of the rotation of ministers, Paul said, let's go over and try Heights Christian Church and the rest is history. They joined the church in 1971 and encouraged five other Aldersgate members to join with them.

Paul became actively involved in the life of the church. First on the diaconate which he soon chaired, then on the Finance Committee, Stewardship, Building and Grounds, Worship Chair, Search Committee (twice) and Elder. He also served on the Evangelism Committee. They both volunteered at the Elegant Flea Thrift Shop each month.

Paul and Shirley are perfect examples of people who live out their faith in reaching out to others. Not only did they do this at church but also within their family. Shirley's mother, Irene, and her sister, Aunt Kitty (who lived to be 101 years of age) both came to live with them, sharing their home for many years. Paul often said he felt like he had three wives! In their retirement, Paul and Shirley have again reached out to the community through their many volunteer activities. They encouraged reading with children at Onaway Elementary School and became Book Buddies which then became a part of the Reads program. Paul also volunteered at St. Lukes Hospital and was an Escort for the City of Shaker Heights through their Housing Office. He took the training and became a member of the Shaker Heights Citizen Police Academy. He served on the Shaker Heights Housing Review Board from 1999-2002. In addition, Paul was first a Board Member and then was President of the Shaker Heights Housing Associates Board that oversees Campbell Court, our church sponsored senior citizen facility and for five years volunteered to do grocery shopping for a homebound resident who lived in the complex.

They have also taken some time to travel, to London, Bavaria, Switzerland and two cruises in the Caribbean. When they celebrated their 50th Wedding Anniversary, their whole family went to Cedar Point and stayed at The Breakers Hotel and had great fun.

Their son, David, now lives in Denver, CO . Their daughter Beverly lives in Shaker Heights and has been the loving caretaker for both her parents for over four years. Beverly has balanced all those responsibilities and devotion along with her work at The Cleveland Museum of Art. Paul and Shirley are also devoted grandparents to Beverly's daughter, Evelyn and she to them, as well! Paul's brother David has passed away but he is still survived by his brother, Philip who lives in Destin, FL.

The family prefers that those who wish may make contributions in his name to The St. Joseph Indian School, 1301 Main St., Chamberlain, SD, 57325 or Heights Christian Church, 17300 Van Aken Blvd., Shaker Hts., OH 44120, where he was a long time member and where Funeral Services will be held Thursday, April 12th at 10 AM.