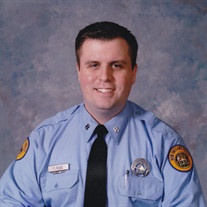 Patrick is survived by his parents, Mary Britt Rose of Fairfax, CA, and C.L. (Laurie) Rose of Cleveland Heights; and his two stepsisters, Meg Hiestand of Chicago, IL, and Ashley Hiestand of Los Angeles, CA. He is a beloved grandson of Betty Britt of Girard, and is preceded in death by his other grandparents, Evelyn Hagan, Cal Rose, and James P. Britt, Sr. Patrick was also a beloved nephew of the late Patrick T. Rose, (Shannon) of Athens; Mike of Painesville Township; Michele Shasby (Mark) of Anchorage, AK; the late Jerry (Julie) of Albuquerque, NM; John of Broadview Heights; Kelly Thomas (Danny) of Austintown; Harry (Cathy) of Howland; Patricia Anthony of Girard; Suzanne of Cleveland Heights; Timothy (Marylynn) of Girard; James (Tracey) of Burton; Kathleen (David) Skowron of Girard. He will be missed by his many cousins, friends, and colleagues.

Known since childhood as "Little Man" because he wore a tie to school every day, he wanted to be a police officer since he could first walk and talk. After graduating from Cleveland Heights High School, he became a police officer first in University Circle and then served in New Orleans from 2001-2009. He retired from the New Orleans Police Department in 2009, and lived in Louisiana for many years before recently returning to Cleveland. Patrick was an only child, but had many true brothers and sisters in Blue.

He had the loudest laugh in the room and used it often. He faced life and illness with bravery and good humor.

The family will receive friends at the church for one hour prior to the Mass.