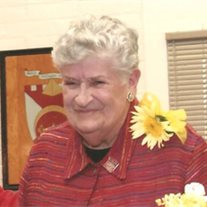 Patricia Kilpatrick (nee Baldwin), was born May 19, 1927, to Leland Stanford Baldwin and Agnes Sweeney Baldwin, and died peacefully March 3, 2016 with her daughter by her side. She was a loving mother to three children, the late Timothy Leland Kilpatrick, The Reverend Catherine Louise Walsh (Mike) and Rufus Hall Kilpatrick III (Kellie). She was the proud grandmother of Jonathan LaVerne Walsh, Jessica Elizabeth Walsh and Isabel Kilpatrick.
Patricia graduated from Shaw High School in 1945. She remained active with her graduating class as part of the reunion committee, celebrating their 70th class reunion just last year. Her college education began at Ohio Wesleyan University in 1945, where she was a member of the Kappa Alpha Theta fraternity. Pat transferred to Western Reserve University's Flora Stone Mather College in 1947, graduating in 1949 with a Bachelor of Arts in history. She received the Master's in physical education from Western Reserve University in 1951. Many of her university classmates remained her closest friends and colleagues throughout her life.
As the daughter of Agnes Baldwin, Patricia was inspired by her own mother's drive and ambition as a single mother raising a daughter during the 1930's and 40's. With only a 5th grade education, her mother was able to work her way thru the business world, eventually retiring from the White Motor Company in Cleveland as Senior Bookkeeper. Following her own mother's example, Pat was able to achieve success both in her career at Case Western Reserve University and in her life of service to the Episcopal Church.
Patricia was devoted to The Episcopal Church. From 1967 until her death she was an active laywoman in the church. She served as a lay reader and in numerous elected offices at the local, diocesan and national levels. She served 3 terms as Standing Committee president, she was deputy to 7 General Conventions, and she served 13 years as a trustee of the General Theological Seminary in New York City. Patricia was awarded the Bishop's Medal in 1997.
Patricia was an honored member of the faculty and administration at Case Western Reserve University. She returned to the University in 1962 as a faculty member in the physical education department. She was appointed as assistant dean of Flora Stone Mather College in 1965 and as associate dean of Western Reserve College in 1972. In 1977 Patricia was named assistant secretary of the University, and in 1979 she became secretary of the University and University marshal. In 1987, Patricia was named Vice President of Case Western Reserve University, the first woman to ever serve in that role. Pat loved her work at the University, she often said "working with young people is the greatest thing in the world".
A few days before her death, Pat received a note from one of her former students who wrote "you have always had a big heart! Big enough to love and be loved in so many ways through your life. Big enough to commit to a stellar college and then university and demand that they be better than anyone could imagine. Big enough to stand strong on principles and values that needed to be made more visible. Big enough to mentor and support thousands of students like me, and big enough to share and care and dare us to take on the challenges we feared... It has drummed to energize your extraordinary leadership impact and hummed with love for the things that are dearest to you. I wish I could hold your heart in my hand and make it work a little harder and much longer." ---------------PATRICIA B. KILPATRICK (nee Baldwin) was the beloved mother of The Rev. Catherine Walsh (Mike) of Chagrin Falls, OH; Rufus Hall Kilpatrick, III (Kellie) of Parma, OH and the late Timothy Leland Kilpatrick.  She was the  dear grandmother of Jonathan LaVerne Walsh, Jessica Elizabeth Walsh and Isabel Kilpatrick. The family prefers that those who wish may make contributions in her name to The Patricia Baldwin Kilpatrick Memorial Scholarship Fund,  c/o Case Western Reserve University Gifts Department, 10900 Euclid Ave., Cleveland, OH 44106-7035 or Trinity Cathedral, 2230 Euclid Ave., Cleveland, OH, 44115 where FUNERAL SERVICES WILL BE HELD, SATURDAY, MARCH 19TH AT 3 PM. FRIENDS WILL BE RECEIVED AT THE CATHEDRAL SATURDAY, MARCH 19TH FROM 1:30-3PM, PRIOR TO THE SERVICE.