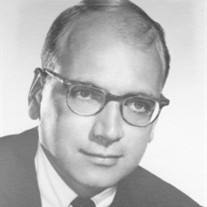 Oliver Farrar Emerson II died on November 14, 2015 at the age of 88, after a long period of declining health. The son of Blanche (Waterman) and Harold Emerson, Oliver grew up and spent most of his life in Shaker Heights, Ohio. He graduated from Shaker Heights High School where he was a track star, winning the state high jump championship in 1945.  He graduated from Bowdoin College in 1949 and remained for the rest of his life a devoted alumnus and active local recruiter. His fondest college memories were performing with the Bowdoin Meddiebempsters, a double quartet which performed overseas in 1948 and 1949 with the Army Special Services. He continued to pursue his love for four-part harmony after college with lifelong friends in the Sleepless Knights, whose recording is a classic of 1950s men's a cappella singing.

After college, Oliver began a business career at the Tower Press. Before the age of computers, the printing industry was a more artistic field. With a creative mind and winning personality, he had found his niche and in 1960, founded his own company, Emerson Press. Oliver took great pride in Emerson Press's reputation for high quality lithography, for which he was honored by induction into the Graphic Arts Hall of Fame and the Cleveland Advertising Club Hall of Fame.

Beyond his own business, Oliver helped to found several organizations that became integral Cleveland institutions. In 1964 he was a founding trustee of the Cleveland Racquet Club; in 1972 he was the founding publisher of Cleveland Magazine. He derived tremendous satisfaction over the ensuing years from watching his vision for these institutions become realized.

Oliver also served generously on the boards of numerous civic and industrial organizations, particularly those supporting education and the arts. He served for many years on the Shaker Heights Board of Education, the Bowdoin College Board of Overseers and the University School Board of Trustees. He was a trustee and president of the former Cleveland Opera Association and a life trustee of the Musical Arts Association of the Cleveland Orchestra. He was a tireless fundraiser for many of these institutions.

Oliver, known affectionately to his many friends as Ollie, most loved family, friends, music of all kinds and his British racing green 1949 MG TC - "the last of the great MGs".

Oliver leaves his beloved wife of 64 years, Mary (deConingh) Emerson; his four children and their spouses Ellen (Emerson) and Barry Nigrosh of Northampton, MA; Scott and Suzanne Emerson of Willoughby, OH; Kate (Emerson) and Keith McCrae of Shaker Heights, OH and David and Dawn Emerson of Chagrin Falls, OH. He will also be dearly missed by his grandchildren, whom he adored: Max, Max's wife Lori and Sam Nigrosh, Meg Davis; Olivia, Chloe and Scott Emerson; Ben and Logan Davis; Kristin and Brett McCrae; Alexander Emerson; and his great grandson Charlie Nigrosh. He was predeceased by his sisters Doris Emerson Conard and Judy Emerson Musser.