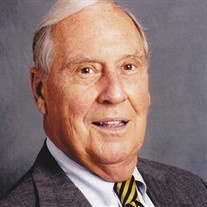 After graduating from Dartmouth in 1952, Norm joined the United States Coast Guard as a Lieutenant J.G. He was stationed in San Diego, California and served on the U.S.S. Perseus for three years. After being honorably discharged from the Coast Guard, Norm was admitted to Western Reserve Law School (now Case Western Reserve Law School) in 1955. He served on the law review and received the Order of the COIF, and he graduated in 1958.

Norn joined the law firm Baker, Hostetler and Patterson (now Baker Hostetler) in 1958 as an associate, becoming partner in 1968, and spent 46 years practicing corporate and securities law and litigation at the firm. He retired from the firm in 2004. His long and distinguished career included serving as the chief outside legal counsel for the Cleveland Clinic during the Clinic's early expansion, and arguing a case before the United States Supreme Court in 1987.

Norm was a member of the Court of Nisi Prius for over thirty years, and he served as Judge of the Court in 1993. He also served on a number of community, educational and philanthropic associations throughout his life, including: Laurel School (trustee); Beech Brook (President and Life Trustee); Handgun Control Federation (Trustee); Storm King School (Trustee); and the Cleveland Hearing and Speech Center (Member and Past President).

Norm married Kathleen "Kitty" Chezworth Taze of Cleveland, Ohio on July 16, 1960, and they enjoyed a long and happy marriage - full of music, art and tennis; travel abroad; entertaining friends and family at their homes in Shaker Heights and then Pepper Pike; and weeks of hiking, birdwatching and stargazing at the Jeavons family farm in Bath County, Virginia - until her death in June 2013.

Norm will be remembered by his family and friends for his quiet mind, his good humor and quick wit, and for his genuine caring for others. He is survived by his daughters Kathleen Stone Jeavons of Washington, D.C., and Ann Lindsey Jeavons of Moreland Hills, Ohio.