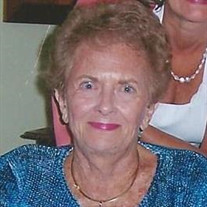 Norma and her 2 sisters, Charlyn and Marie (Norma's twin)
grew up in Buffalo, graduating from Bennett (Tigers) High
School in 1943. She attended Cornell University in Ithaca, NY.
Norma married Charles A. Shirk in 1944 in Buffalo, NY. They
were very happily married for 63 years. They raised their
children in Hinsdale, Il. and spent the remaining 44 years of
their life in Pepper Pike, Oh. and Tidy Island, Fl. with their
children.

At the very young age of 27 Norma was stricken with polio,
and after several years of therapy, she returned home to her
children. Though handicapped by the polio, she raised her 3
children with little extra assistance.

She was an artist at everything
she tried, an a gentle teacher to her grandchildren and
strong matriarch. Norma traveled the world with her loving
husband, Charlie, visiting Europe many times, South America,
Egypt, South Africa, India, Australia, Japan, Russia, including
travel throughout the US. She loved history, reading and travel,
experiencing as many different activities as she physically was
able. She was an avid bridge player, earning masters points her
most active playing years, and swam as often as the weather
permitted.

The family prefers that those who wish may make contributions
in her name to The Seidman Cancer Center of University
Hospitals of Cleveland, 11100 Euclid Ave., Cleveland, OH 44106.

Family services will be held at a later date.

Exactly one week ago today, my Nana's energy shifted and she became star stuff. I like to think of her as the stars and also as the ocean. Her deep blue eyes sparkled like the ocean and the stars every time she looked at me. She was a heroine of epic proportions. At 27, polio stole her ability to walk. She never lost tears over her condition - she made do. Try comparing her to FDR and she'd beg you not to be so short-sighted and to instead find her more similar to the real winner in that relationship, Eleanor. She and her sisters were righteous, strong-willed feminists in a time when women who spoke their minds were more often than not frowned upon. She cherished me for all of my quirks and was one of the first people to actively create a safe space for me to speak openly about my queerness. She was a woman of conviction - no matter the audience, she gladly shared her opinions and with all the intelligence to back up her beliefs. She was an artist at everything. A gentle teacher and a strong matriarch. Her wit could make even the quickest people fall flat on their faces. She was humble and while she'd appreciate this letter, she'd definitely tell me there was no need to make it public. She is free now and I know she is all around me - not just in the ocean and the stars but also the fire and earth. She was tough and if she knew how deeply my heart was broken over the loss of her, she'd grab my hand and smile, telling me it was ok to feel the pain. Then she'd tickle me and tell me to keep on moving. She'd tell me to grab the bull by its horns. She'd tell me to enter the storm, to hold space for my sadness and also to let it make me stronger. Then she'd tell me a joke or a funny story all the while eating a cookie and then re-applying her coral colored lip stick with perfect accuracy and without a mirror in sight. Nan, I see you all over the place and in everything. And more than anywhere and forever, Stormin Norma, you are in my heart.