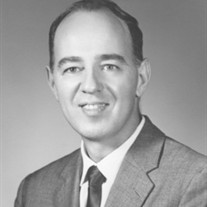 NICHOLAS M. HUDAK was the beloved husband of the late Helen L. Hudak (nee Lilly). He was the dear father of Linda A. Gorski of Solon, OH and Lucille Lee Chipps (David) of Chagrin Falls, OH and was also survived by his dear son-in-law, David Chipps. Nicholas was the dear grandfather of Kelly Gorski and Holly Gorski, Christie Peters (David) and Cathy Chipps; great grandfather of Nicholas and Helena Caraballo and Maxwell Peters. He was the dear brother of George and the late Clarence, Michael and Elmer Hudak.

Mr Hudak was a US Army veteran during WWII and served as a Councilman for the Village of North Randall for 33 years.

Nick was retired from Ford Motor Company as a design engineer. While employed at Ford he invented a system for the engine plants which was implemented in all of Ford's assembly lines nationwide. It was one of his proudest professional achievements.

He was in the process of completing his project of his book of knots. He remained fascinated by the physics of rope and knot tying.

The family prefers that those who wish may make contributions in his name to The Geauga County Dog Shelter, 12513 Merritt Road, Chardon, OH 44024 or to The Public Broadcasting System (PBS) c/o WVIZ, 1375 Euclid Ave., Cleveland, OH.

Funeral Services will be held, Saturday, January 17th at 11 AM in The United Methodist Church of Chagrin Falls, 20 So. Franklin St. 44022, where friends may call one hour prior to the service.

PDF Printable Version
To order memorial trees or send flowers to the family in memory of Nicholas Hudak, please visit our flower store.