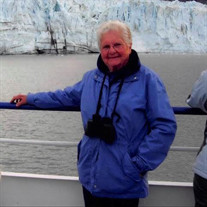 Nancy C. Stevenson, resident of Cleveland, Ohio and past president of the American Horticultural Therapy Association, passed away after a short illness on January 7, 2018 at Judson Park in Cleveland. She was 90.

Mrs. Stevenson was born Nancy Gill Comey on October 1, 1927 and grew up in Shaker Heights, where she graduated from Hathaway Brown School in 1945. She received her bachelor's degree from Smith College in 1949 and her master's degree in Community Counseling from John Carroll University in 1981.

Following her marriage to James D. Stevenson in 1953, the couple lived briefly in San Francisco, but returned to northeastern Ohio to settle in Waite Hill and later in Cleveland Heights.

Both Hathaway Brown and Smith were important in Mrs. Stevenson's life and she devoted much of her energy to these institutions. In 2000, Nancy received Hathaway Brown's Distinguished Alumni Award.

Nancy was a long-time member of both the Garden Club of Cleveland and the Western Reserve Herb Society. Through WRHS she was awarded the Herb Society of America's top honor, the Helen de Conway Medal of Honor, in 2004 and its Golden Sage Award in 2011, marking 50 years of membership.

Mrs. Stevenson also was an active member of St. Paul's Episcopal Church of Cleveland Heights where she served on the Vestry, Altar Guild/Flower Ministry and in the Stevens Ministry. She was a leader in the creation of the perennial, rose and herb gardens that encircle the building and a founding member of the "Lay Weeders", those parishioners who maintain the church gardens.

Nancy was a voracious reader and enthusiastic life long learner. She loved to travel, explored other cultures and nature around the world and encouraged her children and grandchildren to do the same. Nancy's family and many friends will remember her for "living life to its fullest". She knew few barriers, rose gracefully to a challenge and tried to make a difference in the world.

To order memorial trees or send flowers to the family in memory of Nancy Stevenson, please visit our flower store.