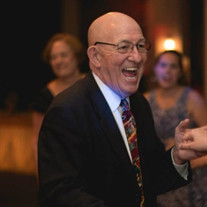 Noel Stewart Andrews (Stu) was born on November 3, 1939, in Singleton, New South Wales, Australia, to Lola and Errol Andrews. He grew up on a sheep farm, went to grammar school in a one-room schoolhouse, and rode his horse, Pretty Kate, to school every day. Later, he graduated from Farrer Memorial Agricultural High School in Tamworth, New South Wales, and matriculated to the University of New South Wales at Newcastle, New South Wales, where he earned a degree in mechanical engineering. Mr. Andrews went on to work in Australia's iron and steel industry and eventually moved to England where he took a position in Middlesbrough for two years. He then moved to Cleveland, Ohio, where he worked with Arthur G. McKee & Co. for many years, living in Mexico, Venezuela, and Brazil, and moving in and out of Cleveland numerous times. After living in Birmingham, AL, Pittsburgh, PA, Chicago, IL, and Brisbane, QLD, Australia, Mr. Andrews resettled in Cleveland in 1984 and started his own contracting business, Western Reserve Remodeling, which he operated until his retirement in 2013.

Mr. Andrews was a long-time member of St. Paul's Episcopal Church in Cleveland Heights where he was active in the Men's Council (having served as President twice), was a member of the House and Grounds Committee, and was an usher. He designed and raised the original 10-foot Christmas wreaths on St. Paul's Church tower in the 1990s at the request of then Rector Nicholson B. White and coordinated this task every year afterwards.

The family prefers that those who wish may make contributions in his name to St. Paul's Episcopal Church, 2747 Fairmount Boulevard, Cleveland Heights, Ohio 44106 where Funeral Services will be held on Friday, December 16th at 4 PM.