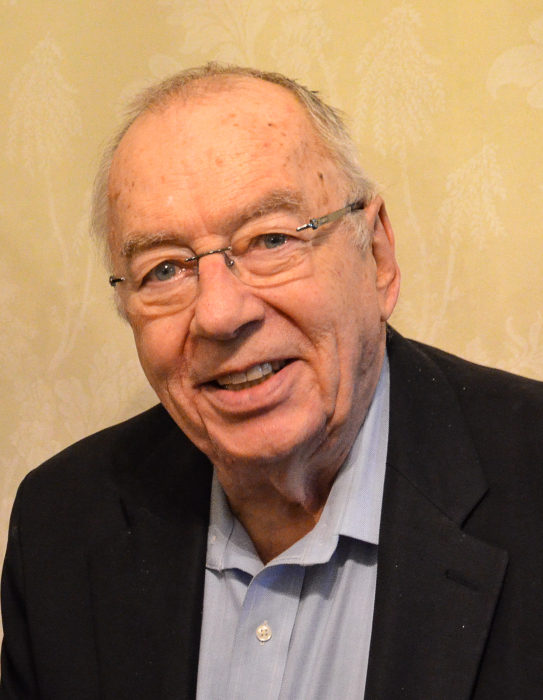 MILAN MIHAL, (Mel), loving husband, father, grandfather, and friend, Professor Emeritus of Fine Arts at Vanderbilt University, and expert in Japanese and Asian art history, died on January 24, 2020, at the age of 91. His beloved wife of 63 years, Marilyn, died on April 13, 2020. Mel and Marilyn met in the first class of their first day of college at Ohio University in 1948. They married in 1956, traveled the world, and shared a wonderful life. They lived in Athens, Ohio; Ann Arbor, Michigan; Tokyo, Japan; and Nashville, Tennessee; before returning to Cleveland, Ohio, in 2013 to be near family.

Mel was born in Cleveland on September 13, 1928. He grew up on Eddy Road before moving to Glenville. As a youth, he rode the street car to the Cleveland Public Library to read books about Japan and took art classes at the Cleveland Museum of Art with his sister, Nada. He remembered listening to announcements about D-Day and the end of World War II over the loudspeakers at Glenville High School. The day he graduated in 1946, he enlisted in the U.S. Army with 25 of his classmates. He served as a medic in the Occupational Force in Japan and rose to the rank of sergeant. He was due to serve on islands in the Pacific where fighting continued after the war, but a typhoon rerouted his troopship to Tokyo where he instead served in the 49th General Hospital Annex, caring for wounded U.S. soldiers. His love of Japan, its art, and culture, merged into what would become his life’s work and passion.

Mel went to college on the G.I. Bill and received his Bachelor’s degree in Education from Ohio University (OU). He taught in schools in Springfield, Ohio, before returning to OU to get his Master’s in Art Education. Back at OU, he taught art and art education for five years. Mel was awarded a Danforth Scholarship to pursue a Ph.D. in Japanese Art at the University of Michigan. He returned to Tokyo for his doctoral research. He and Marilyn lived in Tokyo for three years and while there adopted their daughter, Mia. Mel joined the faculty at Vanderbilt University in 1968 to teach Asian art history in the Fine Arts (now History of Art) Department where he spent his entire career. After settling in Nashville, they adopted their son, Mark.

Mel and Marilyn lived in Nashville for 45 years where they made many friends and raised their family. Mel had a distinguished career teaching at Vanderbilt. He also served as Director of East Asian Studies and advisor to the Asian American Students Association and the Fine Arts Majors Association. Mel received the Madison Sarratt Prize for Excellence in Undergraduate Teaching in 1975 and the Alumni Education Award in 1992. He was instrumental in building the university’s collection of Asian Art through donations from Harold Stern, Chauncey Lowe, and Herman Doochin. He was also noted for building the department’s vast collection of Asian art visual resources. Mel taught courses in Japanese art, Japanese painting and woodblock prints, Chinese art, Buddhist art, and a popular survey of Asian art. Mel’s research field was in the Rimpa School of Japanese painting with a concentration on the works of Sakai Hōitsu. Mel kept in touch with many of his former students and led multiple tours to Asia and Asian art exhibitions. His tours included travel to Japan, Taiwan, Hong Kong, Thailand, Singapore, China, Indonesia, Bali, and Mexico. Mel loved sharing his vast knowledge with the Nashville community. He gave orientation talks for state and local leaders traveling to the Far East, including former Tennessee Gov. Lamar Alexander. He helped to prepare for a visit of the U.S. Chinese Ambassador to Nashville in the late 1970s. In 1983, he delivered a welcoming address to executives of the Bridgestone Tire Company during their presentation of cherry trees to Cheekwood Estate and Gardens, where he was an active volunteer.

Mel and Marilyn loved to travel and spent time in England, Italy, Turkey, Belgium, the Netherlands, and Russia, and to the countries of the former Yugoslavia: Croatia, Slovenia, Bosnia, Serbia, and Montenegro. Mel was proud of his half Slovenian and half Croatian heritage and delighted in reconnecting with his Croatian family. Mel’s heritage included his grandfather, Ivan Zorman, Sr., who played in the orchestra of Johann Strauss in Vienna before moving to Cleveland and becoming the organist at St. Paul Croatian Church. Mel’s uncle, Ivan Zorman, Jr., was a famous Slovenian poet and composer. Both Mel’s grandfather and uncle were Honor Roll Recipients at the National Cleveland-Style Polka Hall of Fame and Museum for their contributions to Slovenian music in America.

In their travels and life, Mel and Marilyn were blessed with friends from all over the world, many life-long friends who touched and enriched their lives beyond measure. Mel was a widely-read scholar, a joker, and conversationalist who had a gift for engaging people and entertaining. He enjoyed good food and company, reading, and always sought to learn new things. He loved teaching and inspired many students to join him in delving deeper into the study of Japanese art and culture.

To order memorial trees or send flowers to the family in memory of Milan Mihal, please visit our flower store.