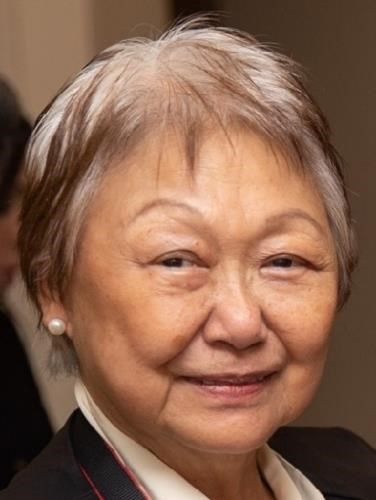 Midori F Fiocchi, M.D., age 82, of Shaker Heights, OH. Midori was born from Japanese parents in So Paulo, Brazil and grew up with traditional Japanese values intertwined with empathetic Brazilian principles. She received a M.D. degree from the Santa Casa School of Medicine in São Paulo, where she met and married her classmate and forever loving husband Claudio Fiocchi, M.D. Midori and Claudio moved to the US in 1973, where Midori trained in psychiatry at University Hospitals/Case Western Reserve University and then in psychoanalysis at the Cleveland Psychoanalytic Institute. After some time in private practice, Midori became the Medical Director of the Jewish Family Service Association of Cleveland, where she practiced for many years helping countless patients with a variety of mental ailments. Midori had a strong, determined and incredibly trustworthy character, but at the same time she was extraordinarily gentle, generous, thoughtful and altruistic, and innumerable people benefitted from these admirable qualities.

She is survived by her husband Claudio; her children Frances (Tom), and Alan (Imane); four grandchildren, Ryan, Sadie, Bowery and Claire; her brother Toyoki Funayama and sister Ofelia Salzer. Midori spoke 5 languages, was a fantastic cook, and loved culture, reading, music and traveling. Those who wish to make contributions in Midori's memory can donate to Heifer International (https://www.heifer.org/give/giving-in-honor.html), an organization whose mission is to end hunger and poverty by investing in farming communities in underdeveloped areas of the world, or to the Jewish Family Service Association of Cleveland, 29125 Chagrin Blvd, Pepper Pike, OH 44122, A/O Dr. Susan Bichsel, CEO.

Send a Sympathy Card
In memory of Midori F. Fiocchi, please consider making a donation to one of the following charities: