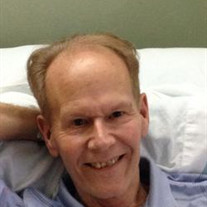 Michael was born in Ridgewood, NJ, where he and his sisters Barbara and Mary were the first triplets born at Valley Hospital. Barbara predeceased him, as did his parents, Elizabeth Nickerson Ward and Arthur Ward Sr.

He is survived by his twin Mary, by his older brother Art, by his aunt Ruth Gray, by his nieces Katherine Ward, Samantha Ward, and Cameron Needle, and by many cousins.

Michael will be remembered by many for his love of family and of animals, for his humor, and for the courage he showed in going through many surgeries.

Michael lived for 23 years in Melbourne, Florida, where he worked as the quality control manager for a telemarketing firm, and where he earned an associate's degree in paralegal studies at Brevard Community College. Previously, he had lived in Atlanta, Georgia, and Dayton, Ohio, where he graduated from Trotwood-Madison High School in 1970.

In the 1970s and early '80s, he worked as a bartender at Giovanni's Restaurant at Beachwood, Ohio, where he regaled his customers with his vast collection of limericks.


PDF Printable Version
To order memorial trees or send flowers to the family in memory of Michael Ward, please visit our flower store.