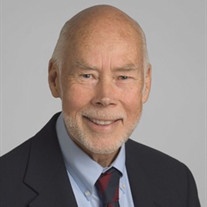 Dr. Michael Geoffrey McKee, family man, psychologist, horticulturist, adventurer, and author of quirky absentee excuses, died on Monday, October 26, 2015 as a patient in the Cleveland Clinic, his workplace for the past 46 years, swaddled in the love of his family and close friends. He was 84 years old. His death was due to heart failure, perhaps not surprising for one who gave his whole heart to care for so many for so long. He isa�"and always will bea�"profoundly missed.

Mike's greatest pleasure and accomplishment was his family. His wife Teddy, to whom he was married for almost 60 years, complemented and balanced him in ways that made him an even better father and person and enabled the two of them to forge a formidablea�"and happya�"team. Together they raised four remarkable children, Cory, Carol, Anna, and Evan, kids who were lucky enough to enjoy not only unconditional love, encouragement and fully funded college tuition, but adequate doses of adversity, independence, and awkward adolescent phases, for all of which they are grateful. Mike also delighted in his sons-in-law and daughter-in-law (John Polena, Steve Baicker-McKee, Doug Grossman-McKee, and Katey Vierkorn, respectively), pleased that his children found matches as strong and loving as his, and glad of the new skills and perspectives the four brought to the family. The thirteen grandchildren who called him Kee Dada�"John Michael, Mark, Scott and Erin Polena; Kyle, Eric, and Sara Baicker-McKee, Morgan (McClellon), Alex, Brent, Geoffrey and Evan Grossman-McKee, and Matt Mramera�"brought particular joy and richness to his life and he was deeply connected to each. The additions of spouses (John's wife Caroline and Morgan's wife Susie), a fiancée (Mark's Jenn) and significant others (Kyle's girlfriend Niki and Brent's girlfriend Catherine) further expanded his sense of pride and good fortune. Mike will miss his wonderful Wednesdays with Briar, his first great-grandchild, and we all regret that he will not have a chance to know the two others on the way (John Michael and Caroline's son due in December and Briar's sibling due in April) as well as the others that undoubtedly will follow in time.

Friends mattered much to Mike as well. His fraternity brothers offered support and reminiscing from his college days to the end of his days. He enjoyed the fellowship of neighbors, colleagues, and other hockey parents, as well as many others in the community. And he was particularly glad of the deep friendship of his collaborator, colleague, neighbor and adopted family member, Chris Moravec, who provided a level of kindness, practical help, and expertise that literally saved his life more than once and gave comfort and friendship to his whole family over these many hard months.

Mike was rooted in the wild surf of the Pacific Ocean and the soil of southern California, where he was born. The descendent of the nurserymen and horticulturists who introduced and developed many of California's most iconic plants and the landscapes of the Disney parks and other famous gardens, he was the middle son of Dorothea "Dot" Evans McKee and George McKee, and the later-in-life stepson of Gerald "Jerry" Woods. He is also survived by his brother William ("Hugh") McKee (with whom he formed the best two-man sand lot baseball team in Walnut Creek in '39 to '41) and sister-in-law Marion and his sister Kathie Zaretsky and brother-in-law Jonathan Karpf, as well as a considerable extended family. Mike proved to be adaptable, thriving after transplants from Santa Monica to the Bay Area, to northern Virginia, back to California, and then to Cleveland, Ohio where he and Teddy lived contentedly the rest of his life. Mike retained ties to his California family and friends always, but he carried his rootstock to each new homea�"sharing his pleasure in the sea on both coasts through the dozens of beach vacations that he and Teddy hosted for their expanding familya�"and creating gardens with his wife that were remarkable not only for their elegant design and diverse plant material but their healing sense of peace and beauty. Their Shaker Heights garden, a horticultural masterpiece, was regularly featured on garden tours and admired by passersby, and often served as the subject matter for his talented photography.

Mike's remarkable intellect sparkled from his earliest years. He graduated from high school and enrolled in the University of California at Berkeley at the age of 16, where he majored in chemistry and earned his Ph.D. in Clinical Psychology. Fueled by unrelenting curiosity and openness to new ideas, he was a true polymath who never stopped learning or generating unusual insights. Always happy surrounded by stacks of books, he read deeply, widely, and with astonishing speed. Mike could recite volumes of poetry in his sleepa�"and even in ICU deliriuma�"spouted the Latin and common names of thousands of plants without hesitation or error, and mangled the pronunciation, syntax, and accents (but not the vocabulary) of several foreign languages. A natural storyteller as well as reader-aloud, he entertained and instructed his children nightly as well as during their cherished Tuesday Evening story-telling times with his made-up serials about backwards worlds and misbehaving aliens. He had a special facility for retelling family stories with just the embellishments and alterations necessary to make them memorably funny and touching.

Mike wrote almost as voluminously and deeply as he reada�"and in every genre imaginable. He leaves behind hundreds of articles in journals and chapters in books, as well as speeches, silly birthday cards, comforting notes, helpful reminders, to-do lists and Grand Thoughts jotted on index cards, and unfinished manuscripts. Lucky people received warm, thoughtful, and eloquent letters from him; even luckier ones could decipher his handwriting to discern the messages. Unlucky ones, on the other hand, like the attendance officer at his children's junior high school, had to figure out what to make of things like (largely illegible) notes written on Valentine cards asking for his children to be excused from school because they'd gone A.P.E. (i.e., off on Alternate Pedagogical Experiences).

Tinker, tailor, soldier, spy. Therapist, professor, researcher, biofeedback authority, colleague, mentor. TV personality, can-poker, cheese salesman, and occasional Santa Claus double. Over his working years, Mike was all of these and more. Well, not tinker or tailora�"those jobs were more skillfully filled by Teddya�"but he did serve in the army in Japan during the Korean War, an experience that cemented both his commitment to peace and his love of Asian art while teaching him to make a bed properly, and he also worked eight years as a psychologist for the CIA during the heart of the Cold War. That job made him forever after a much-desired interview subject for grandkids' social studies projects. Until the day he died, he derived great satisfaction from his life's main work: helping others as a psychologist in roles as a therapist, speaker, teacher, and researcher. He also was glad to help shape his profession by serving on and heading dozens of boards and committees. He was particularly influential as an international expert on biofeedback and stress management. In addition, Mike was grateful for the many colleagues and collaborators who inspired, taught, and assisted him. The list of awards and accolades he received would stretch to a completely unwieldy (and boring) length and so have been omitted here but can be found elsewhere, for those with too much time on their hands or a desire to feel like a slacker. His white beard, twinkling eyes, generous spirit, and calm manner made him a much sought-after media guest; they also regularly caused young children to mistake him for a slimmed-down St. Nick. And Dole and Kraft Cheese were thankful for his work in getting their products to market.

Mike's greatest legacy is his compassion. When he was with you, he was really therea�"focused, interested, learning, understanding. Caring. Accepting. Encouraging. Giving. He made you feel singularly important, which you were to him. And he was there when he was needed or wanteda�"at parent-teacher conferences, sporting events, performances and major life events. At family vacations. At work. When the kids or Teddy or his parents were sick in bed or wanting company. He was there for himself tooa�"exercising faithfully every single day, finding time to nurture his introverted soul, making room for beauty and fun in every day. He packed a remarkable amount of being there into his 84 years and still it wasn't enough for those who knew and loved him.

Even in the last weeks and days when Mike was suffering and depleted, he tried hard to let us know how much he cared. As he breathed his last breaths, he literally leaned into his family and friends, and especially into his wife Teddy, giving us what remained of his warmth and comfort and accepting what we were proud and grateful to return to him. Will the world ever have another like him? He would certainly hope so. In lieu of flowers, please give what he'd really want you to: kindness to someone in need, tolerance and acceptance to someone different, forgiveness to one who has wronged you. Stand up for those who can't stand up for themselves. And thank those who have done for you. As he would like to thank you. He wanted to express particular appreciation now to the dedicated caregivers at the Cleveland Clinic, including his cardiologist Brian Griffin and the many other physicians who stepped up to provide expertise, the outstanding nursing staff, the custodial workers who always offered a smile and good wishes, the friendly parking valets, the encouraging rehab guys in the basement, and everyone else who worked hard to help him and his family over the course of his illness. He was grateful to everyone in his life for making it the rich and wonderful adventure it was.

The family prefers that those who wish may make contributions in his name to The Cleveland Botanical Garden, 11030 East Blvd., Cleveland, OH 44106.