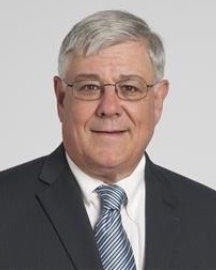 He took his internship in internal medicine and a residency in anesthesia at the Naval Hospital in Bethesda, MD, where he became Chief Resident. This clinical training was followed by fellowships in cardiothoracic anesthesia from the Naval Hospital and from Emory University in Atlanta, GA. Michael became a Staff Anesthesiologist at the Naval Hospital, and Assistant Professor of Anesthesiology at the Uniformed Services of Health Sciences, as part of his military obligation. He served for eight years of active duty in various roles. Michael also served in the United States Navy Reserve and was recalled in support of Operation Desert Shield/Storm.

He was appointed to the Cleveland Clinic in 1988 as a Staff Anesthesiologist in the Department of Cardiothoracic Anesthesia. He later served as Vice Chair of Operations in the department. He was board-certified in anesthesiology, perioperative transesophageal echocardiography and critical care medicine. Michael had been invited to present his clinical experiences and research to medical symposia and conferences nationally and internationally. He has published articles and abstracts related to his specialty interests in leading medical journals. He has authored several chapters in medical textbooks on cardiac anesthesia.

Michael was an Associate Professor of Anesthesiology at the Cleveland Clinic Foundation Health Sciences Center at the Ohio State University. He was active at the Cleveland Clinic Lerner College of Medicine as an instructor since its foundation. He was a Diplomate and a Senior Examiner for the American Board of Anesthesiology, and sat on the Intraoperative TEE Council of the American Society of Echocardiography. Despite his various administrative duties, teaching was his passion, second only to patient care. Over the years he educated and mentored hundreds of medical students, residents, fellows and nurse anesthetists. The Clinical Fellow of the Year Award at the Cleveland Clinic Cardiothoracic Anesthesia Fellowship program was named in his honor. He was so proud of his daughter Lauren and son-in-law Daniel following his footsteps into anesthesia. His legacy lives on through all the lives he touched.

Michael and Kelly, originally of Connellsville, PA, were married in 1979. They lived in Pittsburgh, PA, for one year before moving to Bethesda, MD, where they lived for eight years. Their first daughter, Lauren, was born there in 1984. They chose to live in Shaker Heights, OH, and raise their family. In 1990 they welcomed triplets, Claire, Catherine and Matthew; Rachel was born in 1992.

Although family was Michael’s passion, he also enjoyed many hobbies and interests. He has been involved in The Boy Scouts of America his entire life and earned his Eagle Scout award. He took great pride in mentoring his son, Matthew, to earn his Eagle Scout award. Michael was a member of the Greater Cleveland Council. He served as scoutmaster of troop 662, and volunteered at the district and council levels. Michael was a member of Fairmount Presbyterian Church in Cleveland Heights, OH. He loved skiing with his family, both in the Rockies, as well as locally, near their family farmhouse in southwestern Pennsylvania. The family vacationed every summer in Kiawah Island, SC. His favorite sport was golf, which he played year-round with friends locally, nationally and internationally. He enjoyed collecting toy soldiers, philatelics, numismatics and shooting sports. He was known for his specialty dishes including: puttanesca sauce, French toast, and pizzelles. His favorite sports team was the Pittsburgh Steelers. He loved reading military history and savoring a scotch with his beloved lab, Toby, at his feet. Michael and Kelly were each other’s best friends and soulmates for almost 40 years. In addition to family, they shared a passion for traveling, theatre, concerts, cuisine, and hiking. Their greatest joy came from spending time with their grandchildren.

Michael accomplished much in his 64 years of life. He always placed family first and as a result, his legacy is profound. He will be missed by many and he will remain a guiding light in the hearts of his family and friends forever. "

A Service of Remembrance will be held Saturday, May 4th at 2PM in Fairmount Presbyterian Church, 2757 Fairmount Blvd., Cleveland Hts., OH 44118