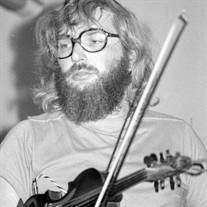 Michael "Doc" Dreyfuss died at home on September 25th. He is survived by his wife of 58 years, Elisabeth T. Dreyfuss; his children John Henry Dreyfuss and Kyle Dreyfuss-Wells (Kevin); and his grandchildren Lily and Lucian Dreyfuss, and Fenner Dreyfuss-Wells.

Beginning in 1969, and to his death, Michael was a member of the rock band, McKendree Spring. The band received international renown and Doc is widely considered one of the greatest violinist/violists in the history of Rock & Roll. His technical skill combined with his extraordinary technological innovations remain unparalleled. McKendree Spring toured on their own and with such great bands as Traffic, Elton John, Rod Stewart, War, Jethro Tull, Fleetwood Mac, and others:

Michael's own work both with McKendree Spring and as a soloist included some of the earlier experiments in electronic modulation of sound. With Robert Moog, the inventor of the synthesizer as a family friend, Doc was one of the early masters of this revolutionary technology. He used countless electronic and analog effects and amplification devices to produce sounds never before heard emanating from a viola. His Theramin is on display at Cleveland's own Rock and Roll Hall of Fame and Museum. Michael often told the anecdote about getting both booed and cheered at Carnegie Hall after playing "God Bless the Conspiracy," his own distorted version of "God Bless America" that has been widely compared to Jimi Hendrix' rendition of the "Star Spangled Banner." https://web.archive.org/web/20060916022359/http: // www.zaretandsonsviolins.com/mikedreyfuss.html

Michael also had a long and successful career beginning in 1982 as Music Director for Wyse Advertising, winning multiple National Addy and the Clio Awards for various campaigns.
Many of the political issues that Michael and Elisabeth supported are still pressing today, such as free speech and human rights. Throughout his life Michael had a strong sense of fairness and justice and felt that if "one of us is hurt, all of us are hurt."

Michael was much loved by his family, fellow musicians, and many friends.

The family prefers that those who wish may make contributions in his name to Amnesty International, USA. Private Family Service. FRIENDS MAY CALL AT BROWN-FORWARD, 17022 CHAGRIN BLVD., SHAKER HTS., OH 44120 ON SUNDAY, OCTOBER 1ST FROM 4-6 PM. The Program will start at 4:45 PM.