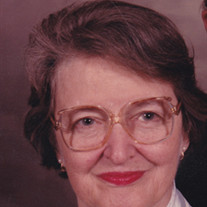 Mary Jean Loucks Neiswander was born on May 8, 1926 in Omaha, Nebraska. She grew up in a loving family which included her parents, her older brother John and younger sisters, Barbara and Patty. She attended Brownell Hall School and graduated from Central High School. She graduated as a math major from Vassar College in the Class of 1946. Following college, she returned to Omaha where she worked as a commercial artist and took classes in portrait painting at the Joslyn Art Museum. During the summer of 1949, she studied painting at Ecole des Beaux Arts in Fontainebleau, France. There she met Arlyn Claud Neiswander, a fellow student who had been awarded a scholarship to study architecture. The two were married in 1951 and shared 58 years of marriage. Children, Kirk and Patty, were born in 1953 and 1955, respectively. Grandchildren followed and provided endless joy for her.

In summarizing her own life, Mary Jean said that the major threads in her life were family first, volunteering second, artwork third and recreation fourth. Her devotion to her children and grandchildren was unmatched. She enjoyed any opportunity to reunite with her siblings and her extended family. Often the site of those visits was western Maine where she and Arlyn spent summers in retirement.

Her volunteer efforts were often related to her artwork. She designed programs, newsletters and illustrations for the Junior League, Fairmount Presbyterian Church, Vassar College, and various other organizations. Her interest in history led her to promote genealogical research as President of her chapter of Colonial Dames, Regent of her chapter of DAR, and active volunteer at the Western Reserve Historical Society Library. She held offices in the Junior League Garden Club, the Monday Afternoon Club, and the Cleveland Vassar Club.

Mary Jean enjoyed art throughout her life. She had over 100 portrait commissions. Most were pastel portraits of children but she also painted some adults and dogs with oils and watercolors. She was honored to have a one-woman show in Maine where she exhibited many of the watercolors she had painted there. Over the years, she picked up various other artistic interests: flower arranging, stained glass, silver smithing, furniture refinishing, carpentry, upholstery, caning, sewing, to name just a few. Carving pumpkins and decorating Easter eggs with the grandchildren were artistic exercises.

More than the many accomplishments of her life, Mary Jean will be remembered by her family for her warmth, elegance, cheerful disposition, sense of humor and unending kindness.

The family prefers that those who wish make contributions in her name to The Memorial Fund of Fairmount Presbyterian Church, 2757 Fairmount Blvd., Cleveland Hts., OH 44118 where Memorial Services will be held on Saturday, November 22nd at 11 AM.


PDF Printable Version
To order memorial trees or send flowers to the family in memory of Mary Neiswander, please visit our flower store.