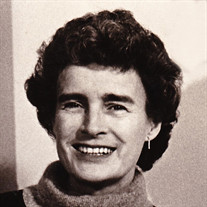 In 1951 she married the late Dr. Amasa Ford, faculty of the CWRU School of Medicine for a half century.

She died on January 12, 2018 at her home in Judson Manor in Cleveland.

From 1954-69 she worked with Livingroom Learning at Cleveland College and, for several years, sang in the choir of the Euclid Avenue Congregational Church.

In 1972, she was a delegate for George McGovern to the Democratic Convention. From the '60s to the 90's she devoted her time to the activities of the Peace Movement, taking leadership positions in Women Speak Out for Peace and Justice and the Nuclear Freeze.

She loved the arts, music, opera, fine art, theater, and world travel as well as genealogy.

A loving wife, mother, sister, and grandmother, she is survived by her sons, Ned and his wife Carla Myers; Charles and his wife Brenda Powell and Donald and his wife Laura Perrotta; eleven grandchildren and many dear friends.