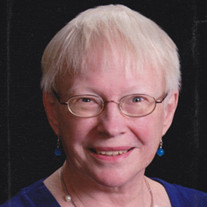 After a long harrowing battle with ovarian cancer, Mary finally decided she couldn't live one more day without coffee and went to a place where she can forever see the sunrise over the lake while drinking her morning coffee. A glass of scotch in the evenings while feasting on wild blueberry pie would finish offer her day. She passed from this life at 5:25 AM on the morning of August 28, 2015 at the Hospice of the Western Reserve center in Cleveland. All of her family had a chance to say goodbye.
Mary was raised to enjoy the heck out of life and love hard and long; she succeeded beautifully on both counts. She was born in Evanston, IL to Ernest George and Gretchen Baarsch McEwen on October 23, 1940. She was an only child 'with siblings,' due to her 3 cousins who were as close as brothers and sisters: 'Fat' Billy Baarsch who now can call her 'Slenderella' once again, and Sue and San Baarsch. During the summers she went to the lake that was the home of her soul. She graduated from Evanston township high school in 1958.
After high school she studied at Harvard and then returned to Chicago for medical school at Northwestern. Mary moved to Cleveland to start her internship and residency at the Cleveland Clinic after getting her MD in 1966. After a long rotation during the winter of 1966, she attended a party at Cousin Sue's place. Mary was introduced to a man sitting on a sofa. When he stood up, 'he just kept going up and up' until she started giggling. Her laugh was a wonderful thing when it got going, totally uncontrollable, mostly silent, and ending with tears streaming down her face. Whether it was the giggle or the red hair, that man she met was the love of her life, Henry C. Doll. They married on September 16, 1967.
Their honeymoon in Europe included a particularly turbulent flight, after which Mary said to Hank, 'let's have kids, we never know if we are going to die tomorrow.' So have kids they did; Sarah Virginia Doll, Elaine Gretchen Doll, Katherine McEwen Doll and Eric Martin Doll.
While her kids were growing up, Mary pursued her passion to teach and plan, by creating the Early Childhood Enrichment Center (ECEC). She was also active in a variety of PTAs and church activities. She continued to use her medical degree by working with the kids at the Kenneth Clemment Health Center, Help for Retarded Children, and in the school doctor program in Cleveland Heights. Through it all she maintained a sense of humor and a great sense of fun. She would laugh at herself as easily as she would laugh at a joke and she loved music.
After her children left the house, Mary continued volunteering with Fairmount Presbyterian Church and built her community through yoga and regular prayer groups. At Fairmont Presbyterian she spearheaded both the Fair Trade Coffee program and the acquisition and installation of new doors for the Garth (columbarium). She and Hank enjoyed birding and travelled around the world, visiting Turkey, the Galapagos Islands, Hong Kong, China, Hawaii, Austria and several Central and South American Countries. Often she commented that the planning and anticipation of the journey was half the fun.
Mary was the core of her family and will be greatly missed. She is survived by her husband, Hank Doll, her children, Sarah, Elaine, Kate, and Eric, and her grandchildren: McEwen A. Gutierrez, Sofia E. Gutierrez, and Jackson Dowler Doll. She taught us some of life's great lessons: 'You don't ask, you don't get' and 'Money is like manure, it doesn't work unless you spread it around.' Mary taught us that love is what brings us closer to the divine and that we honor her by loving the world and one another.

The family prefers that those who wish make contributions in her name to: Early Childhood Enrichment Center, 19824 Sussex Rd., Shaker Hts., OH 44122 or to The Memorial Committee of Fairmount Presbyterian Church, 2757 Fairmount Blvd., Cleveland Hts., OH 44118 where a Memorial Service will be held on Friday, October 23rd at 2 PM.