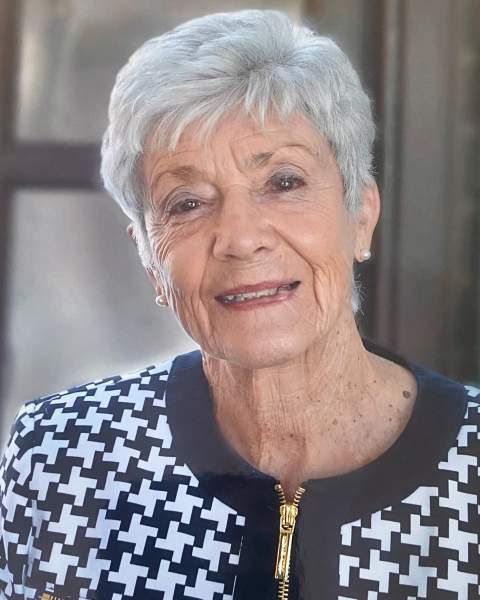 Mary French Conway, born in Evanston, Illinois on September 11, 1928, passed away on August 25, 2022 surrounded by her adoring family. Mary was an extraordinary woman; elegant, graceful, the ultimate lady, unfailingly generous in every aspect of her well-lived life.  She will be greatly missed by her family, friends and community, but her legacy continues.

Mary was seven when her parents, Charles M (Charlie), and Jeanette S. French, moved to Shaker Heights, Ohio, where her beloved younger sisters, Peggy and Jane, soon joined them. Mary attended Fernway Elementary and enjoyed Aloha Camp in Fairlee, VT, where she was proud to have attained the rank of Admiral. She thrived at Laurel, where she was named “biggest social butterfly” in her senior yearbook. Beautiful and vivacious, Mary always had many admirers. She was less than pleased when her father moved the family to the far reaches of Pepper Pike in 1942, so far out on Fairmount Boulevard that Charlie gave wartime gas coupons to select young men who braved the journey.  By the time Mary was a sophomore at Vassar majoring in psychology, she had committed to a young Yale man named Bill Conway, who had committed to her in return. Their engagement party was almost canceled by the Thanksgiving Blizzard of 1950. With a tenacity they would demonstrate throughout their lives, Mary and Bill skied from Fairmount Boulevard to Belvoir Road in Shaker where some of Bill’s ten brothers met them with a sled loaded with liquor. Mary and Bill would be married for seventy-one years, an enduring love affair that deepened to the very end.

After their wedding, they moved to Hibbing, Minnesota in the dead of winter, where Bill was learning the iron ore business from the frozen ground up. Far removed from family and friends, they forged an unshakable bond that would last a lifetime; they were a team. Mary had two boys within fourteen months while Bill worked split shifts as a pit foreman. There he was befriended by Slovenian dump truck driver who, hearing Mary was pregnant for the second time, presented Bill with a bottle of wine he had made himself. Not for Bill, he clarified, but the missus, to strengthen the blood.

As Bill has always been the first to say, his many business achievements would not have been possible without Mary’s loving support and sage counsel, including sometimes asking him hard questions. In 1965, now with four children ages 3-13, Mary created a homelife for them halfway around the world in Sydney, Australia, where Bill was the driving force behind an international mining operation. In their four years in Sydney, Mary and the family made deep friendships that survive to this day, while nurturing a love of sports and travel carried on by her children and grandchildren.

Along with her partnership with Bill, Mary’s proudest achievement was being a devoted mother to her four children. When the family returned to Cleveland in 1969, they moved into the same house on Fairmount Boulevard which had once seemed so remote. It would be Mary and Bill’s home for the next fifty-three years until they joined many of their friends at South Franklin Circle in 2022.  Mary took pride in squeezing her car into the 1940’s size garage like she was docking a canoe back at Aloha. She was a master gardener and enjoyed walking the path to the Country Club golf course where they would invite family and friends to watch the fireworks from the 7th tee every Fourth of July. Mary excelled at golf, tennis and bridge and was much sought after as a playing partner. She was both fun and competitive, particularly when the game was on the line. The colorful style she’d developed in Sydney set her apart from most women in her circle, such as the embroidered, distressed jeans she wore in later years, the perfect mix of cool and elegant.

As their children grew older, Mary had more time to pursue her other vocation; community service.  She considered herself a “professional volunteer,” giving her time and considerable talents to get things done for the good of multiple organizations. A true community woman, she walked in her own strength, wisdom and power, empowering younger female leaders through words of encouragement and her quiet, consistent presence. One Laurel alumnae, who followed in her footsteps as board chair forty years apart, considered Mary a trusted advisor and mentor. During her tenure, the younger Chair would often ask herself WWMD? - What Would Mary Do? Mary received formative volunteer training as a member of the Junior League of Cleveland. She served, most often in leadership positions, on many boards dedicated to improving the lives of children and the elderly. She served on the vestry of St. Paul’s Church where she trained as a Stephen’s Minister, a faith-centered program that equips volunteers with essential caring and relating skills, helping them to listen to, care for, and walk with people navigating difficult times. Mary shared these skills with the wonderful caregivers surrounding her in her final stage of life, a blessing to them all.

She was a major contributor to the missions of Beech Brook, the Alzheimer's Association Cleveland Chapter, Benjamin Rose Institute and The Garden Club of Cleveland. Most of all she supported her beloved Laurel School where she was a Trustee Emerita, and, with Bill, her partner in life and philanthropy, was an exceptional benefactor. Mary’s leadership in creating Laurel’s Butler Campus illustrated her commitment to empower girls through outdoor learning and experiences. She was an early voice in the school’s plans to create transformational experiences for its students, supporting construction of the Conway Pavilion, learning yurts, and other critical projects. Mary was often credited as the “velvet hammer” in the fundraising initiatives she took part in. This skill set was celebrated in 1999, when the Mayor of Cleveland recognized her as Outstanding Fundraising Volunteer of the year.

Mary was blessed with ten grandchildren and worked hard to ensure that she and Bill carved out time to get to know them. Every summer over multiple years, they took a small group of grandchildren to the R Lazy S Ranch in Jackson, Wyoming, to ride, hike and enjoy each other’s company. Mary was famous for her dry wit and playfully blunt observations when she judged someone falling short of the mark, a collection of zingers known as “Grammy Unfiltered.” She was skilled at needlepoint, devoting countless hours to creating beautiful keepsakes for her children and grandchildren. She remained to the end a woman of relatively simple tastes, enjoying few things more than a good book, relishing the deals she found at Costco, keeping her Pinot Grigio properly chilled with an added cube of ice.

Mary will be deeply missed by the countless people whose lives she touched, most of all by her loving family. We will cherish her in our hearts forever.

She is survived by her beloved husband of seventy-one years William E. Conway; her four children and their spouses Peter F. Conway (Mary), William T. Conway (Amy), Jane C. Barber (Linda) and Anne C. Juster (Joe); her ten grandchildren Katherine (Geoff) and Susannah (James) Conway, Justin (Jess) and Willa (Bruno) Conway, Nicholaus (Jackie), Cody (Molly) and Todd (Morgan) Barber, Julia, Grace and Hal Juster and five great-grandchildren. She is also survived by her sisters Margaret French Breer (William), Jane French Tatlock (Richard) as well as a cherished great aunt to their children and grandchildren. Also surviving her are her sister-in-law Peggi Conway, brothers-in-law Bud, Terry and Neil Conway, and more than sixty Conway nieces and nephews. Finally, she is survived by her faithful cat Timi, her companion to the end.

A Memorial Service will be held at 2 p.m. Saturday October 8 at Saint Paul’s Episcopal Church, 2747 Fairmount Blvd., Cleveland Heights, OH 44106. Memorial donations in Mary’s name may made to Laurel School and Hospice of the Western Reserve.

You may view the live stream of the service at https://youtu.be/R8Rq8QDmu4U.