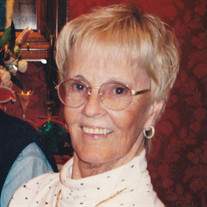 Mary Jones Chilcote died peacefully with family by her side on Monday, December 18, 2017 at the age of 91 years. Her desire was to pass at the bridge table of the Cleveland Whist Club, after bidding 7 NT with her partner having all the aces. Mary was the daughter of the late Federal Judge Paul Jones and of the late Caroline Bonnell Jones. Caroline was a survivor from the Titanic when it made its maiden voyage in 1912. Dear sister of the late Paul Jones, Jr.

Mary graduated "Cum Laude" from Laurel School in 1944. She was on many Varsity sport teams at Laurel and was named a member of the All Cleveland School Girls' Field Hockey team for several years. She was interested in all sports and was a "mathematical shark". She always won the "baseball throw", as her Father practiced with her during her childhood. She continued these interests at Smith College, where she graduated also with honors in 1948. After college, she joined the Junior League, and the Recreation League and volunteered at MacDonald House of University Hospitals. Her interest in sports continued all of her life. She was captain of The Country Club Golf team and won the Plain Dealer Trophy in 1965 at her home club. She also played field hockey for the Cleveland Field Hockey Association, and took her three boys to watch. She became an avid tennis lover, and continued playing most of her life.

Mary became one of Cleveland's and Ohio's most renowned women's bridge players. She became a Life Master in 1968 and won many bridge championships. She became a GRAND Life Master in 1996 and had won more than 21,578 Master Points in her lifetime and ended as number 124 on the list of all-time ACBL Master Point Earners. She was 24th amongst women. In 1974, she played for the United States in the World Olympiad in Las Palmas, Canary Islands. Mary belonged to The Country Club of Cleveland. She taught bridge lessons at the St. Andrews Club in Delray Beach, Florida for many years. She won several tennis tournaments at the clubs in Delray.

The family prefers that those who wish may make contributions in her name to Laurel School, 1 Lyman Circle, Shaker Hts., OH 44122. A Memorial Service will be held at Fairmount Presbyterian Church, 2757 Fairmount Blvd., Cleveland Hts., OH 44118 on Saturday, January 6th at 3 PM.

Living one day at a time,
Enjoying one moment at a time,
Accepting hardship as the pathway to peace.
Taking, as He did, this sinful world as it is,
Not as I would have it.