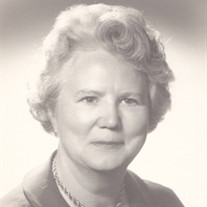 In lieu of flowers, the family prefers those who wish make contributions in her name to Friends of the McGaffin Carillon Fund of the Church of the Covenant, 11205 Euclid Ave., Cleveland, OH 44106, where a Memorial Service will be held on Saturday, August 29th at 1pm.

Mary Louise Gingery (Bee) was born in Clearfield, PA. She often told stories of growing up with her older twin brother and sister, Donald (Bud) and Sarah (Sis), younger brother Hugh and many rambunctious friends. Her nickname started when the twins were called Brother and Sister and Baby which was then shortened to Bud, Sis and Bee.

Two major events in her younger years had a lasting effect on her life. Her singing voice developed early and she won the state championship at 16. On a less happy note, while singing carols on Christmas Eve her senior year in high school, she was involved in an automobile accident that left her with two broken legs. Following an extensive rehabilitation period she was able to graduate and even sing at her graduation ceremony, a testament to her strength which carried her through her adult life.

Her collage years were spent at Flora Stone Mater Collage (Case Western University) where she graduated with a BA in education and voice performance. While in college, she was the soprano soloist at The Church of the Covenant. Here she met her future mother -in-law, Gertrude B Martin. One of the highlights of her time at Mather was being a member of Phi Kappa Zeta sorority. She also told stories of singing at all her friends' weddings and, of course, meeting James W Carpenter, (Jim).

She was married to Jim in 1943 at the Church of the Covenant. They continued to live in the Cleveland area where they raised two daughters, Catherine and Margaret. As a wife and mother, Bee continued as a soloist and had numerous volunteer activities. She served on the board of Florence Crittenden Foundation, PTA, Red Cross Blood Program, Cleveland Heights High Choir Parent Chair, Girl Scout Leader and Girl Scout District Officer.

The family enjoyed vacations to Cape Cod, camping, the "big trip out west" and many happy times sailing, skating and sledding in the winter and weekends with cousins in the country.

In 1968 they moved to Pepper Pike. In 1972 Jim died at the young age of 58 after a battle with brain cancer. Bee decided to return to the workforce and held jobs with RSVP and the Benjamin Rose Foundation at Margaret Wagner House.

At age 82 she moved to Judson Manor where she enjoyed 19 years of retirement. At Judson she made several new friends and reconnected with old friends. As a lifelong volunteer, she served on the food committee, garden club, and for the Fun Fair. She enjoyed planting her garden box on the roof every spring with her daughters and at 91 started making pottery. Tuesday pottery class was her favorite activity and was very prolific. Contact Catherine to receive some of her creations!!

The family wishes to thank The Hospice of Judson Retirement Community for taking such loving care of Bee in her final months and the staff of Judson Manor who were her dear friends for 19 years.


PDF Printable Version
To order memorial trees or send flowers to the family in memory of Mary Carpenter, please visit our flower store.