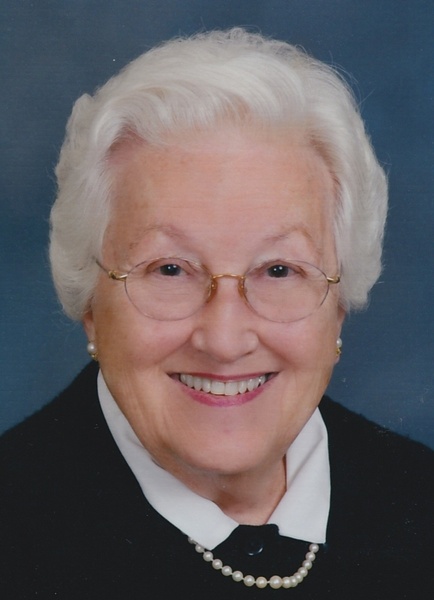 Marjorie Louise Drollinger (nee Mitchel) of Shaker Heights Ohio, age 97, passed away on June 27th, 2021.  She was preceded in death by her husband of 46 years, John Drollinger, Jr.  She was further preceded in death by her parents William E. Mitchel and Naomi H. Mitchel of Cleveland Heights, her sister Elizabeth McLeod, and her brother William E. “Bud” Mitchel Jr.  She is survived by her four loving sons John M. (Adrienne) of Littleton CO; Mark H. of Pewaukee, WI; David D. (Patricia) of Mountain Lakes NJ; and Paul E. of Edmonds, WA.  She is also survived by six grandchildren and four great grandchildren.

Marge lived almost her entire life in Cleveland and was an active participant in and supporter of Greater Cleveland groups and causes.  She was raised in Cleveland Heights attending Fairfax Elementary School and Roxboro Junior High School before graduating from Cleveland Heights High School in 1942.  She maintained monthly contact with her high school classmates in her “lunch bunch” and through regular reunions.  Some of her friendships lasted 90 years.

Marge was an independent thinker and doer.  Around the age of 12, she began summer visits to her grandparent’s farm in Sedalia, MO.  Her father put her on the train in downtown Cleveland – alone – for the ride to Missouri.  Her grandfather was a retired railroad man and no doubt had every hand on deck keeping an eye on her.

After high school, Marge went to work in the offices of Reliance Electric & Engineering Company in Euclid in support of the war effort.  Reliance motors were included in many US Navy and commercial ships and ports.  In July 1945, Marge and four Reliance women donned hard hats and coveralls and boarded a ship for a tour of major Great Lakes ports in the US and Canada promoting Reliance equipment.  Marge was ahead of her time regarding equality of the sexes.  Her father was aghast when she came home one night and announced that she had gone to see the president of the company to change the rule that allowed men to smoke at their desks but made women go to the ladies restroom for a cigarette.  The rule was changed.

At Reliance she met the love of her life, John.  They married in 1950 and lived briefly in Detroit, then Toledo before making their home in Cleveland, first in South Euclid and finally in Shaker Heights.

While raising four boys, Marge did extensive volunteer work at the Homecrafter’s Shop on Larchmere Blvd selling arts and crafts made by individuals in their homes including her mother, a superior seamstress and quilter.  Marge devoted enormous time and energy to the Shaker Lakes Regional Nature Center (now the Nature Center at Shaker Lakes).  She helped get the Center established, get the Clark Freeway stopped and managed the gift shop for many years.  Under her guidance, the small gift shop generated a remarkable revenue stream which supported the salaries of teachers providing services to Cleveland, Shaker, and Cleveland Heights students and residents.

Marge was dedicated to her family.  She enjoyed travel on family vacations to Chatham, MA, Palm Springs, CA and Naples, FL.  She also traveled widely with her husband on business and pleasure trips getting a taste of the world before returning to her beloved Cleveland.  Marge was a “hockey mom” before that term existed.  With a smile, she ferried boys to practices and games far and wide, surviving many winter days in cold ice rinks.

While Marge will be remembered as a lady of grace and style, she could be at home in many arenas.  When son David worked in the oil fields of West Texas, Marge was invited to help with a newborn granddaughter.  Using a company “dualie” pickup truck for transportation, her son and co-workers were amazed as she handled the rig’s manual transmission and CB radio like an old hand.

Marge was a great supporter of Cleveland arts and charitable organizations including the great Cleveland Orchestra, Cleveland Playhouse, Music and Drama club, Cleveland Institute of Music, Cleveland Botanical Garden, Western Reserve Herb Society, Vocational Guidance, and Cleveland Sight Center among others.  She was a member for over 60 years at Forest Hills Church Presbyterian.

Marge was a 42-year survivor of cancer and whipped Covid-19 twice in the last year.  Old age and Alzheimer’s have claimed a great one.

Marge’s family wishes to express their deep gratitude to the team of wonderful caregivers who allowed Marge to stay Safe, Healthy, Comfortable, and Happy in her home.

Marge lived a life of grace and compassion, putting the needs of others ahead of her own.  She will be missed by her family, friends and Cleveland.

In lieu of flowers, memorial donations in Marge’s name may be made to:

The Nature Center at Shaker Lakes

Funeral Services will be held at Brown-Forward Funeral Home, 17022 Chagrin Blvd., Shaker Heights, Ohio 44120, Wednesday, June 30th, 2021 at 12 noon. FRIENDS MAY CALL AT BROWN-FORWARD, WEDNESDAY, JUNE 30TH FROM 10:30AM – 11:30 AM. Family interment services will be held in Lake View Cemetery following the service.

A celebration reception will be held after the funeral service beginning at 2:45 pm Wednesday, June 30th,  at the Cleveland Skating Club, 2500 Kemper Rd..