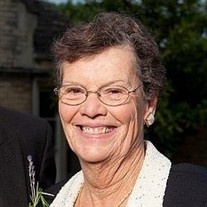 Marjorie Morris Carlson passed away peacefully at home in Bratenahl on October 18, 2016 after a several month battle with a form of bone marrow cancer.

She was a life-long member of Fairmount Presbyterian Church where she served as a Ruling Elder and President of Fairmount Guild. She was a founding member of The Junior Committee of The Cleveland Orchestra and Chair of Key Concerts. She served as President of The Junior League of Cleveland. From 1974 until her death Marge was a member of the Board of Trustees of The College of Wooster where she served as Vice Chair. She has been a Trustee of The Playhouse Square Foundation since 1991 and served on the boards of Judson Park, The Musical Arts Association, The Cleveland Institute of Music and The American Red Cross.

From 1986 to 1998 she worked at The Cleveland Foundation where she served as Executive Director of The Grantmakers Forum and from 1990 to 1998 as the first Director of Donor Relations.

She and her family had a summer cottage on Lake Erie in Mentor, Ohio where Marge spent every summer of her life. In their retirement she and her husband had a winter home on the Out Island of Great Exuma in the Bahamas where she cofounded and served as the Board President of The Exuma Foundation.

Marge and her family have enjoyed a lifetime of competitive and pleasure sailing on Lake Erie out of Mentor Harbor Yachting Club. For six summers after their retirement, Marge and her husband enjoyed summers cruising the East Coast from Hilton Head to The Bay of Fundy and each of the Great Lakes except Ontario. In 1973, Marge and her all-woman crew won the right to represent the Midwest at the US Women's National Sailing Championships in Newport, R.I. where they competed for the Adams Cup.

Music was central to Marge's life. She was blessed with a beautiful alto voice and an ability to harmonize effortlessly with other voices. In her adulthood she took up the classical guitar and acquired quite a reputation for her "ditties of celebration" written to be sung by a group led by Marge to honor a birthday, retirement or other event.

Marge got her private pilot's license but after one solo flight with her baby in a car bed in the back of the plane decided that a role as co-pilot for her husband was the best flying career for her.

She was an avid swimmer and led a water aerobics group known as The Pals (Poseidon's Aquatic Ladies Society) in Exuma every winter.

Marge was blessed with a graciousness of spirit, a dedication to the notion of service to others and a strong sense of right and wrong. She was a wise, thoughtful and devoted participant in the endeavors about which she cared deeply and was ever the congenial, loyal and supportive friend, daughter, sister, mother and wife.