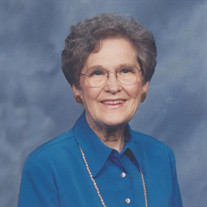 Marilyn Jean Thomas Douglas died at Kemper House in Highland Heights, OH on January 26, 2017, at the age of 86. Born in Wadsworth, OH on April 4, 1930, to Elba John Thomas and Virginia Blair Thomas, Marilyn grew up in Wadsworth in the house that her father built in the "country" which was 3 ½ miles west of Wadsworth. An only child, Marilyn loved singing, playing the piano, and reading.

She graduated from Heidelberg College in Tiffin, OH in 1952. It was there that she met John Douglasa�"who would be her husband of 64 years. Marilyn and John met in the Heidelberg College Choir when, according to her husband, he asked her to save him a seat on the bus when the choir traveled for concerts. Obviously, Marilyn agreed!

After graduation, Marilyn worked as a high school math teacher for a year while her fiancée (John) served in the Army at Fort George in Augusta, GA. On December 31, 1952 Marilyn married John in Wadsworth, OH and in the spring of 1953 Marilyn relocated to Augusta, GA where she continued to be a math teacher until their first childa�"Sara Leea�"was born. Subsequent years involved moving as John pursued his education and career. They moved to Columbus, OH and Morgantown, West Virginia where their 2nd childa�"John Thomasa�"was born. From there, she moved to Ithica, NY; Birmingham, MI; Lexington, KY, and finally, in 1973, Oxford, OH. In Oxford she obtained her Masters' Degree and taught business statistics at Miami University.

While helping to raise her children, Marilyn was very involved in church activities (First Presbyterian Church, Lexington, KY) and was responsible for starting one of the first day care centers focused on meeting the needs of inner-city children. She was an accomplished musiciana�"singing, playing the piano, and playing the harpsichord for many years. While in Oxford, Marilyn was very involved in music activities (singing in the choir at Oxford United Methodist Church), and in maintaining a very extensive network of neighborhood and church friends. A large part of Marilyn's life in Oxford, OH focused on caring for her mother (Virginia) for 20 years. Virginia had Alzheimer's and Marilyn oversaw her care until her death in 2001. Later in 2001, Marilyn presented with symptoms of Alzheimer's and began her own struggle with the disease.

In 2009 Marilyn's husband had a stroke and they moved to Abington, PA to be closer to their son, and relatives. Sadly, in 2010, their beloved son, John, died suddenly. They remained in Abington until 2016 when Sara moved her parents to Cleveland to be closer to her. Sara, John, and Marilyn had much fun togethera�"singing songs, watching musicals, and just enjoying their time together.
Marilyn struggled with Alzheimer's for 16 years, but her natural personality remained at the core. She was gracious and funny, and enjoyed humming little songs and waving at people. On January 21, 2017 she slipped into unconsciousness. Hospice of the Western Reserve was called and Sara and her father were with Marilyn until the end. They were able to say their good-byes and John was able to hold her handa�"as he had done for 64 yearsa�"one last time. She passed very peacefully surrounded by family and her favorite music.

Marilyn was an avid reader and enjoyed reading the works of past and current theologiansa�"some of her favorites were Dietrich Bonhoeffer, Marcus Borg, John Spong. She challenged herself to explore a deeper understanding of the meaning of our lives and our relationship with God. She felt that our human connection with "the other" was best experienced in nature, with a loving relationship with animals, and in meaningful contributions to the world.

Marilyn had a deep love of music and the emotional connection that she found through various musical outlets. In addition to playing the piano and harpsichord at home and singing in church choirs, she enjoyed attending concertsa�"in particular the Cincinnati Opera. She shared her love of opera not only with her husband, but with her son as well who was the Director of the Opera Department at Temple University until his death in 2010.

Marilyn loved cats and could always be seen with one of her cats by her side as she worked in her beloved garden. She also loved to walk. She was often seen walking around Oxford while running errands in her later years. She found the solitude and connection with nature to be very restorative and something that she needed in order to have a balanced life. She also enjoyed travelling with her husband. They particularly enjoyed the train trips that they took across Canada in addition to trips to Scotland, Wales, Nova Scotia, Iceland, and elsewhere.

Finally, Marilyn loved her family and friends. While she tended to be more solitary by nature, she found tremendous satisfaction in close relationships with friends. She maintained connections with friends over many decades and many moves. Maureen Tarpey was a particularly close friend since 1957 and Ellen Harp a friend since the 1970s who continued to send Mom pictures of cats along with newsy notes of life in Oxford, OH. During her Abington, PA years, she was very close to Angela Combs, and Sandy Yarnella�"companions who loved and watched over her.

Those wishing to pay respects may stop by Sara's house from 3-5pm on Friday, February 3, 2017 (email for directions).
In lieu of flowers, the family requests that donations be made in honor of Marilyn Douglas to the "John T. Douglas Fund" at Temple University Boyer College of Music. Checks should be made out to: Temple University, Boyer College with "John T. Douglas Fund on the memo line. Checks can be mailed to: Temple University, Post Office Box 827651, Philadelphia, PA 19182-7651. Please indicate in your letter that the gift is in memory of Marilyn Douglas and ask that Sara Douglas (25111 Wimbledon Road, Beachwood, OH 44122) be notified of the gift. You can also contribute online: giving.temple.edu/voice-opera and select the "John T. Douglas Fund".
Marilyn loved music her whole life. She was key to her son's early love and life-long commitment to music--especially nurturing young artists. This is a fitting tribute to her love of music, her love of young singers, and her love and devotion to her son.

To order memorial trees or send flowers to the family in memory of Marilyn Douglas, please visit our flower store.