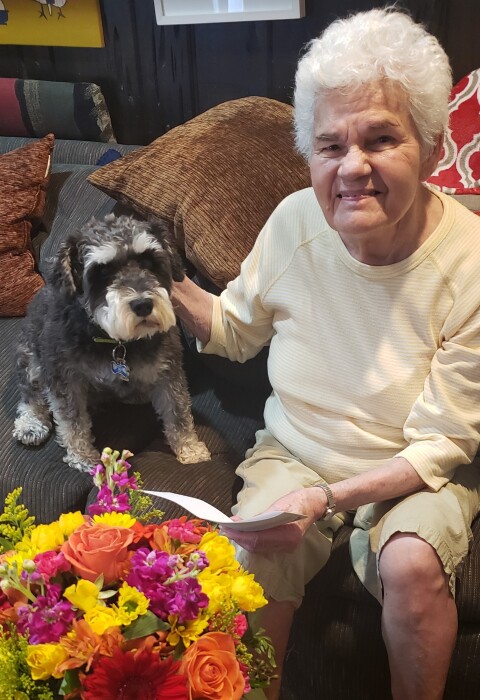 We Remember the Life of Maria Luisa Acevedo Jones…

Maria Luisa Acevedo Jones was born to Ramon Acevedo and Felicita Lopez on June 24, 1930, in Arecibo, Puerto Rico. She was one of eight children born to that union.

Maria, or “Lulu,” “Lu,” ,”Mom,” or “Mamita”, as she was affectionately called by many, was raised and educated in Arecibo and Hatillo, Puerto Rico.  At the age of 23, Maria met the love of her life, William Jones, Jr., a young airman, who was stationed in Puerto Rico. After their first meeting, Maria’s warm smile, laughter, and grace captured William’s heart.  They courted for six months and married on October 17,1953 in Quebradillas, Puerto Rico.  In 1954, “Lulu” bravely faced many challenges such as learning a new culture, a new language and other obstacles (including the Cleveland weather!) as they settled into life in Ohio. William and Maria were very happy, they had a good life. Their marriage of forty-three years produced five children. They both valued the importance of family, faith, and commitment.

Amidst the ups and downs of life and a growing family, Maria began working at Dalton Industries, a clothing manufacturer in 1964, remaining there until retiring in 1987. Maria was an excellent seamstress who made all her own clothing and that of her children. She was always stylishly dressed, looking very classy and very much the lady. “Mamita” even dressed up when she was going to the airport!

“Lulu” had many hobbies, and she did all of them well! Whether it was gardening – she loved all flowers (especially roses) and had a green thumb that could make any plant grow or cooking one of her many delicious home-cooked meals for her family – she put her whole heart into it!

As a woman of great faith, Maria was a devout Christian and prayer warrior. After many years in the Catholic faith, she joined Iglesia Metodista Unida in 1993. In 2015, she joined South Euclid United Church of Christ and enjoyed regular attendance. Every morning started with a cup of coffee and reading her bible.  She often felt the presence of the Holy Spirit and loved music that allowed her to praise the Lord and clap. “Sing to Him, sing psalms to Him; Talk of all His wondrous works!” (Psalm 105:2 NKJV).

Maria Luisa was called away to her heavenly home “in the twinkling of an eye” on July 21, 2021. She was preceded in death by her husband, William Jones, Jr., her parents, several of her siblings: Angel, Aurea, Maria Dolores, and Antonia; and sons, William Alfredo and Luis Antonio. She leaves behind many memories to be cherished by her daughters: Karen Marie, Luz Haydee and Maria Luisa, daughter-in-law, Vikki Shine, and son-in-law, Peter Wenger; three siblings: Hilda, Alejo, and Haydee; four grandchildren: Luis, Gary “Patches,” Narsha and Aaron; and one great grandson, Titan, in addition to a host of family, extended family and friends. Maria Luisa Acevedo Jones’ zest for life and her warm and gracious spirit will truly be missed.

A Funeral Service will be held at South Euclid United Church of Christ, 4217 Bluestone Road, South Euclid, Ohio 44121 on Saturday, August 7th at 10 AM AND WHERE FRIENDS MAY CALL FROM 9:30 TO 10 AM PRIOR TO THE SERVICE.

To order memorial trees or send flowers to the family in memory of Maria Jones, please visit our flower store.