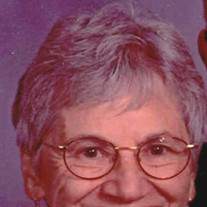 Marguerite Julin was born on October 6, 1928 in Pittsburgh, PA to Virginia and Alberto Casabona,both professional classical musicians. Marguerite's father played with the Cleveland Orchestra under George Szell and the Pittsburgh Symphony. Marguerite grew up in the apartment above her grandfather's drugstore on Fifth Avenue in McKeesport, PA, with her brother, Albert, and her extended family, including her maternal grandparents and various aunts and uncles. Maybe because she had so many adults looking after her, Marguerite had a strong spirit of adventure and independence. As a child she explored the hilly streets of McKeesport, to the dismay of her parents, and kept a packed suitcase under her bed on the off chance that she would find an opportunity to travel to Africa.

As a young adult, she received her Bachelor's degree in piano performance from Lake Erie College. After graduation, she married Glenn Julin whom she had known since high school. They were married for 64 years. Glenn served in the Korean War as a First Lieutenant in the Air Force. After he completed his service they moved to Cleveland. Over the years, Marguerite taught piano at the Cleveland Music School Settlement while taking care of her own growing family. She also sang in the Cleveland Orchestra Chorus under the baton of Robert Shaw. She loved singing in the church choir at First Baptist Church of Greater Cleveland and taking care of the music library. She also was active as a Stephen Minister.

With the oldest of five children in college and the youngest in elementary school, Marguerite pursued another of her long-time interestsa�"literaturea�"obtaining a Master's degree in Library Science from Case Western Reserve University. She worked in the Cuyahoga County Library system, primarily as a Fine Arts librarian,until her retirement at the age of 70. During this time, Marguerite swam regularly at Cumberland Pool and Notre Dame College, taking part for many years in the annual Swim for Diabetes fundraiser.

She passed her love of music,literature, and swimming on to all of her children.

When she was diagnosed with Alzheimer's at age 80, she barely missed a beat. She continued to engage in the activities that she had always enjoyeda�"music, swimming, singing, walking, reading. She was never slowed by self-pity, but adapted to each step of her disease with grace and cheer, taking pleasure where she found it, which was just about everywhere.

When, at 84, she was diagnosed with stage four lung cancer, she not only endured with serenity the seemingly endless tests and appointments, she often remarked after a long day at the Clinic that she had had such a wonderful day!

In her final year at Arden Courts in Chagrin Falls, Marguerite took part in musical programs, took long walks with her children at a nearby park, helped other residents, and continued to appreciate and take pleasure in the extraordinary kindness of the staff and her visitors. She always had a smile and a hug to share.

Marguerite will be greatly missed by her family and friends.

The family prefers that those who wish may make contributions in her name to the Alzheimer's Association of Cleveland, 23215 Commerce Park #300, Cleveland, OH 44122 or to First Baptist Church, 3630 Fairmount Blvd, Shaker Hts., OH 44118, where a Memorial Service will be held on Saturday, March 14th at 10 a.m.