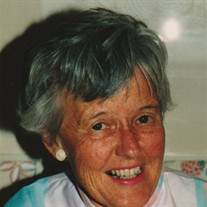 MARGARET NEWELL MITCHELL, age 92 of Cleveland, OH, passed away peacefully in her sleep on December 25th, 2017.

She was the beloved wife of almost 69 years to William A. Mitchell and the dear mother of five daughters: Ann M. Hunter (Richard) of Gates Mills, OH; Jane D.M. Ellison (Arthur) of Shaker Heights, OH; Elizabeth K. Mitchell "Betty" of Cleveland Heights, OH; Margaret M. Weingart "Meg" (Samuel) of Cleveland, OH and Catherine N. Mitchell "Kate" of Naples, FL. Margaret was the dear grandmother of George Hunter, Worth and William Ellison and Elena and Nikolai Weingart. She was the great grandmother of Mary Hunter and Brooks Ellison.

Margaret was born in Westfield, NY and was in the Westfield High School class of 1943 and the Cornell University class of 1947. Margaret was valedictorian of both schools, and earned her Phi Beta Kappa key at Cornell.

After graduation, Margaret spent her early years as a public health nutritionist for the state of Virginia before she married William A. Mitchell in December 1948.

After moving to the Cleveland area, in the 1950's, Margaret was elected to serve on the South Euclid City Council and later she continued her public service as an elected member of the Shaker Heights City Schools Board of Education. She was chosen for the City of Cleveland Mayoral Task Force in the 1970's, interviewed judges for the Cleveland Bar Association, and was on CSU's Urban Affairs Visiting Committee. Margaret carried out these and many other civic activities all while working as the Secretary-Treasurer of her husband Bill's company, Even Cut Abrasive Company.