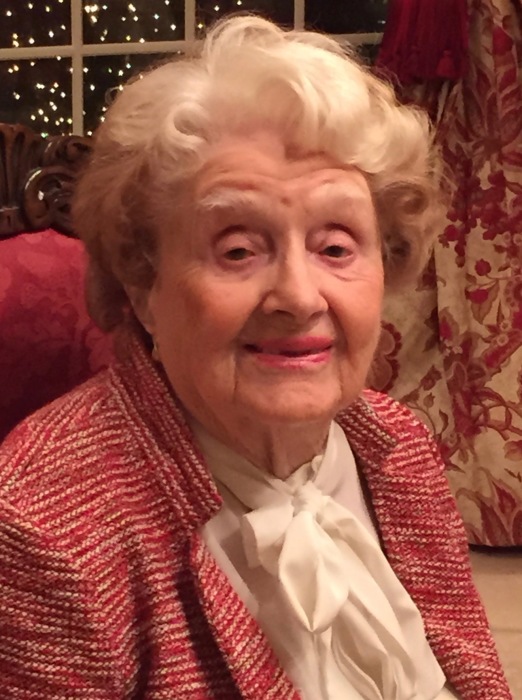 Margaret Therese Brown Marting was born in Sloatsburg, New York on May 26, 1913, the youngest of nine children of Nicholas T. Brown and Margaret Buckley Brown.  She graduated from the University of Kentucky in 1935 and was an 85-year member of Kappa Kappa Gamma.  Upon graduation, she returned to New York to work for International Business Machines as a salesperson of data processing systems and then as executive assistant to the president of the Book-of-the-Month Club.  She was personally hired by the founders of both companies.  She married Walter A. “Del” Marting in 1943 at St. Patrick’s Cathedral in New York City.  Following his service in WWII, they moved to Cleveland, where her husband was a lawyer at Jones, Day, Cockley & Reavis.  When her husband became president of Hanna Mining Company, she had the opportunity to travel extensively with him.  She accompanied him to Japan in 1956 to launch the SS Cosmic, one of the largest ore carriers at the time.  She is survived by her two sons Walter A. Marting, Jr. (Marja) of Reno, Nevada and Michael G. Marting (Leslie) of Cleveland Heights, Ohio and four grandchildren Michael G. Marting, Jr. of Chicago, Illinois, Pauline G. Marting of Cleveland, Ohio, Walter A. Marting III of Reno, Nevada and Isabelle Marting of Reno, Nevada.

Two of Margaret’s great passions were gardening and children’s health.  She was an honorary life trustee of the Rainbow Babies & Children’s Foundation, and president of Rainbow’s board of trustees from 1963 to 1964.  She was an honorary member of the Shaker Lakes Garden Club, having joined as a member in 1946. A past director of the Garden Club of America, she was a Philadelphia Flower Show emerita floral design judge, having judged at the show for many years.  She was also an emerita member of the board of trustees of Holden Forests and Gardens, and member and past president of the Intown Club of Cleveland. She was a champion golfer and a member of the Kirtland Country Club for more than 70 years. She was also a member of the Women’s Council of the Cleveland Museum of Art, which she joined in 1947, and an honorary member of The Mundane Club.

The family would like to thank the staff of Judson Park, and especially her long-standing private caregivers Sadie Byler and Annette Jones.  The family prefers that those who wish may make contributions in her name to UH Rainbow Babies & Children’s Hospital, 2101 Adelbert Rd., Cleveland, OH 44106  or Cleveland Botanical Garden, 11030 East Blvd., Cleveland, OH 44106.

To order memorial trees or send flowers to the family in memory of Margaret Marting, please visit our flower store.