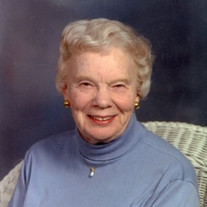 Mae grew up in the Pelham Bay area of the Bronx, in New York City and spent many summers at a family farm in Oxford, New York. She graduated from Christopher Columbus High School in the Bronx, New York in 1944. After high school, Mae attended Alfred University in Alfred, New York, where she was in the Cadet Corps Nursing Program, received a degree in Nursing, and joined the Cadet Nurse Corps upon graduation in 1948.

Mae worked in the medical field throughout her lifetime at various facilities culminating with her retirement from the Cleveland Sight Center in June 2009. Her 26 year career at the Cleveland Sight Center provided Mae some of her most rewarding and challenging experiences as a health care professional. She was most proud of the work she did involving childhood vision screening and was instrumental in securing donations to procure a mobile van which she then used to bring vision screening services to inner city children and adults, as well as many area schools throughout Northeast Ohio.

Mae was active in a variety of civic and social organizations, including the Cleveland Play House and the Shaker Heights Nature Center. Mae was a member of the First Baptist Church of Greater Cleveland and was especially fond of all the friends she made through the 49'ers group.

Mae was an avid Bridge player and loved traveling, making several trips to Europe, Canada, and throughout the United States, especially to visit family and friends.

Mae was preceded in death by her parents, husband Jim, son Douglas, and brother, Kenneth Harper.

The family of Mae Von Pless would especially like to thank the staff at Devon Oaks for the caring and support they gave to Mae over the past 3 years and, most recently, Hospice of the Western Reserve for their compassionate care over the last 3 weeks of Mae's life.

A Funeral Service will be held on Saturday, March 5 at 11am at Brown-Forward, 17022 Chagrin Blvd, Shaker Hts., OH. FRIENDS MAY CALL ONE HOUR PRIOR TO THE SERVICE.
To order memorial trees or send flowers to the family in memory of Mae Pless, please visit our flower store.