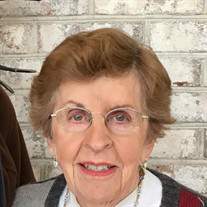 MADGE WOLLAEGER KASTNER, 91, passed away on Friday, February 9, 2018 after a brief illness. Born on April 23, 1926, she was the daughter of Mary Ann and Howard Hopwood of Latrobe, Pennsylvania. She had two brothers, Howard Harbison Hopwood II and David Jackson Hopwood, who preceded her in death.

Madge graduated from Cleveland Heights High School in 1944 prior to attending Penn Hall Junior College and then Indiana University, where she received a Bachelor of Science in Home Economics. Following, Madge worked for the East Ohio Gas Company in the Home Service Department, performing cooking demonstrations in Cleveland, suburban schools, and cooking schools in Ohio.

Madge married Erich Wollaeger (Rick) the "boy next door" on October 20, 1951. She and Rick raised their two sons, Christopher and Philip, in Cleveland Heights. Once the boys were in upper elementary school, Madge worked as a preschool teacher at Fairmount Presbyterian and Forest Hill Presbyterian Churches.

Madge and Rick were longtime members of Grace Lutheran Church of Cleveland Heights, Ohio. Madge taught Sunday School and belonged to Grace's Women's Council, Evening Guild, and the Altar Guild. She also served in leadership capacities for those organizations.

Erich passed away in January of 1995. In April of 2001, Madge married Glenn Martin Kastner. Madge and Glenn enjoyed many church and social groups together and travelled numerous places because of Glenn's membership with the Hillcrest Band. They travelled to Washington, D.C., Hawaii, England, Australia and Carnegie Hall in New York City.

One of Madge's interests was gardening. She served as a docent at Shaker Lakes Regional Nature Center and completed Horticultural Therapy Courses at the Garden Center of Cleveland. Madge also enjoyed many other activities. She was an Assistant Ward Leader for Cleveland Heights. Additionally, she was active in the International Alpha Phi Sorority and the local Alpha Phi Alumnae Association. She was a member of various garden clubs and bridge clubs, and up until recently she was active in Meals on Wheels in the Hillcrest area.

Those who wish may make contributions in her name to Messiah Lutheran Church.

Interment will be at Knollwood Cemetery, Mayfield Heights, Ohio.