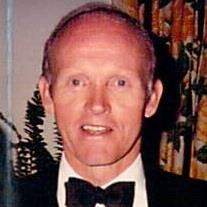 Tim was married to Nancy Kadow for 55 years. He never stopped missing her after her death in April, 2014. When he went to high school dances, no matter who he was dating, there were always two other dance cards he signed: his beloved first cousin Ronnie Merriman's, and Nancy's. They had three children, Kate (Steve Hughes), Jenny (Tim Burke) and John (d. 1990), who always felt his unconditional love and support.

Tim graduated from University School in 1948 where he was captain and goalie of the varsity soccer team, varsity baseball pitcher, served on the athletic council, and was a member of Bob Simpsons' famed Mathematics Society. He was awarded the prestigious Cadmean Society Award for "good fellowship, fine democratic spirit, and true loyalty". Tim graduated from Yale University in 1952 with a B.A. in History, Economics, and Political Science. While at Yale he pitched for the Freshman baseball team, was President of Trumbull College, Secretary of Yale Key, and President of the Sword and Gate Society.

After college, he deferred Harvard Law School to enlist in the Army because the war in Korea was underway and he wished to serve his country. He always said that out of so many lifetime accomplishments, he was most proud of the time he spent readying his men in the mountains of North Carolina to fight in Korea, and of the respect he earned from them. Tim himself did not go to Korea, but entered the Counter Intelligence Corps, completing training in counter intelligence investigations and mastering German at the Army Language Training School in Monterey (unsurprisingly, he often made time to play golf at Pebble Beach for the enlisted men's rate of $10/round). He was sent to Salzburg and Vienna, Austria, where he was in the thick of the early days of the Cold War until his honorable discharge in June, 1955. Despite his family's pleas for "spy stories", he never forgot his confidentiality oath and would share only little pieces of experiences that were exciting, dangerous, and sometimes sad.

After leaving the Army, Tim worked for the Aluminum Company of America until entering Western Reserve Law School in 1957. While he was attending classes, not only did he serve on Law Review and the editorial staff of the school's student publication, he co-founded Western Reserve Life of Ohio. Despite his load, he graduated from law school in two years instead of three!

Upon graduation, he received an offer to work in a Cleveland law firm, but chose to continue with Western Reserve Life. In 1969, Tim began a new career in banking, and partnered with a group of Clevelanders to purchase 14 small banks in Ohio, Indiana, and Montana. He was Chairman of the Board and Chief Executive Officer of Union Commerce Bank from 1974-1982, and of its parent company from 1979-1982. At that time, he was the youngest man ever to head a major Cleveland bank. In 1982, he left the world of banking to form Bancapital Corp, an oil and gas investment drilling company. He retired in 1989.

During his lifetime, Tim also served on multiple corporate boards, including Republic Bancorporation, Montana Bancapital, Merriman Construction Company, and Forest City Enterprises. He was a member of YPO (Young Presidents Organization). Possessing a deep, innate sense of civic responsibility, Tim held many volunteer roles. He was Chairman of the Board of the Cleveland Treatment Center, Cleveland's Comprehensive Employment Training Program, the Cleveland Institute of Music, and Vice Chair of the Board of Cleveland State University.

He helped co-found and was the first Chairman of the Board of Youth Opportunities Unlimited. He also served on the boards of Hathaway Brown School, the Greater Cleveland Growth Association, Cleveland Tomorrow, United Way Services, the Northern Ohio Opera, and the Huntington and Bicknell Foundations.

Tim was a very active alumni of University School, and it meant a great deal to him that his son was the fourth generation of Treadways to graduate from US. He was President of the Board in 1992-94 and a Life Trustee. In 1998 he received the prestigious University School Alumni Award for his faithful service to the school. But the most profound accomplishment of his civic service was when Tim, dealing with the devastating loss of his beloved son to suicide, founded the Cleveland Chapter of the American Foundation for Suicide Prevention. He tirelessly raised money (always grateful to his friends for their support), and recruited volunteers, staff, and advisers from the field of mental health. Feeling frustrated that raising funds for research was not enough, he envisioned a program for high schools to educate adolescents on the facts about depression, its treatability, and how to ask for help. Today the thriving organization, now known as LifeAct, annually serves thousands of Northeast Ohio youth from all socioeconomic backgrounds.

A terrific athlete, Tim enjoyed sports all his life, including sailing, riding, skiing, tennis, paddle tennis, and fishing. But Nancy wryly attested that the greatest love of his life was golf. He was a member of The Pepper Pike Club and Kirtland Country Club, and playing there with friends were among the happiest times in his life. He was an avid and loyal follower of his beloved Cavs, Browns and Indians.

Tim was a voracious reader, and loved Western movies. (He was embarrassed by the fact that friends, relatives and strangers repeatedly told him he was a ringer for Clint Eastwood.) Few knew that while in Austria in the CIC, part of his cover was as a student in classical opera: he had a beautiful bass-baritone voice. His family delighted in hearing him sing around the house and in the car, including Neapolitan love songs, Verdi arias, popular songs from his youth, and silly songs to make his kids laugh.

He also loved to travel, and among his favorite places were the mountains of Montana. Whether riding there, fishing in the Florida Keys, traveling abroad, playing a golf course, out at "The Farm", or looking out on the meadow at their home, he reveled in the beauty of nature. He loved all animals, could charm any cat or dog, and he and Nancy adored their succession of spoiled Welsh Corgis.

Tim was devoted to his wife, daughters and their families. In addition to Kate, Jenny and their husbands, Tim is survived by his grandchildren Halsey and Jenny Hughes, and Molly and Danny Burke. He spent countless hours taking them to the golf dome, for ice cream, and cheering them on in their plays, band concerts and sporting events. Tim also leaves behind his beloved cousin Ronnie (his partner in mischief from their youngest years), her husband and his best friend Art Merriman, and their children Lisle, Art, Charles and Amy. Our families were and always will be one big clan bound by love and laughter.

The family would like to thank the VNA caregivers, as well as the amazing teams at Arden Court and Heartland Hospice who cared for Dad throughout his illness with unwavering kindness, compassion and a sense of humor. In lieu of flowers, donations may be made in Tim's memory to LifeAct, 29425 Chagrin Blvd #203, Cleveland, OH 44122; University School 2785 SOM Center Rd., Chagrin Falls, OH 44022; or the charity of your choice. FRIENDS MAY CALL AT THE KIRTLAND COUNTRY CLUB, 39438 KIRTLAND RD., WILLOUGHBY, ON SATURDAY, OCTOBER 15 FROM 4-6 P.M.