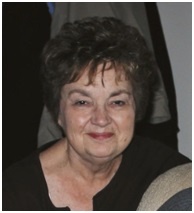 Lillian Rumrill Chapman, 88, formerly of Hudson, Ohio and Danielson, CT, passed away on April 24, 2020, in Cleveland Heights, Ohio, after a long struggle with Alzheimer’s disease. She was preceded in death in 1993 by her husband of 37 years, Peter Paul Chapman and her daughter Audrey in 2008.

Born in Killingly, Connecticut, in 1932, she was the daughter of Earle and Beatrice (Stone) Rumrill and sister of Richard E. Rumrill of Hollywood, FL. She graduated from Killingly High School in 1950 and went on to Memorial Hospital School of Nursing in Worcester, Massachusetts. She was incredibly proud of her 40 year nursing career, which began in a doctor’s office in Danielson, CT, and ultimately led to a 20 year career at the VA Hospital in Brecksville, OH.  A cancer survivor, it was her medical knowledge and fighting spirit that helped her get through that illness. Throughout her lifetime, she was always proud to let caregivers know that she, too, was a nurse.

She moved with her family from Danielson, CT to Hudson, OH in 1974, where she lived until 2011. She made lifelong friends with her neighbors in Hudson, where she was also a member of St. Mary’s Catholic Church.  She enjoyed music, and her love of singing which  began  in her high school glee club continued throughout her life: while playing the piano at home, at church, or in the chorus of her assisted living facility.  She insisted that each of her children learn an appreciation for music through private piano lessons and participation in the school band.  She enjoyed travel, especially through Europe; and she traveled well into her retirement. She never met a stranger; and her warmth and friendly nature were reflected in her infectious laughter.

Her greatest source of pride was her children:  Brian of Houston, TX, Heather (Chris Holtkamp) of Shaker Heights, OH,  Audrey (deceased),  Lesley (Bryan Casteel) of Cincinnati, OH, and her grandchildren: Stephen, Catherine, Eva, Alex, Sophia, Evan, and Paul.  She worked tirelessly to ensure that each of her children entered the fields that they were most passionate about,  receiving the best education available to achieve those goals.  She lit up whenever she had the chance to talk about her family.

A Funeral Service will be held in Danielson, Connecticut sometime in the coming months.  Memorial donations in lieu of flowers can be made to her tribute page at the Alzheimer’s Association http://act.alz.org/goto/lillian_chapman.