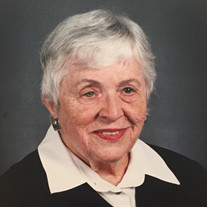 Leann Donahue Rayburn was born in 1920 in Chicago, Illinois and moved to Shaker Heights, Ohio with her parents James and Eleanor Donahue. She attended Woodbury Elementary School and then graduated from Laurel School in 1938. She then entered Connecticut College. She met her future husband, James G. Rayburn, during college in Washington, DC. She was married to James in 1943 in West Texas where Mr. Rayburn was stationed in the Army Air Corp. during the war. She moved back to Shaker Heights after the war when Mr. Rayburn started working in Cleveland.

She was very active in the Moses Cleaveland Chapter of the Daughters of the American Revolution, Hawken Parents Association and Fairmount Presbyterian Church. She traveled extensively.

She was preceded in death by her husband, James G. Rayburn, parents, James F. Donahue and Eleanor W. Donahue. She and James formed Bellford Metal Products which became Flexalloy Inc. which became a very successful fastener company headquartered in Cleveland. She leaves behind her sons James (Gertrude) and Andrew (Heather) and her three grandchildren Iris, John and Annabelle.

The family prefers that those who wish may make contributions in her name to The Memorial Fund of Fairmount Presbyterian Church, 2757 Fairmount Blvd., Cleveland Hts., OH 44118. A Gathering will be held from 10:00 AM to 11:00 AM on Saturday, October 15th at South Franklin Circle Community Center, 16575 Franklin St., Chagrin Falls, OH 44023.
To order memorial trees or send flowers to the family in memory of Leann Rayburn, please visit our flower store.