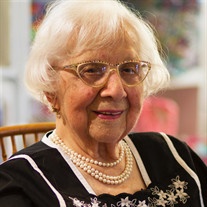 Laura M. Lipari, a resident of Bemus Point, NY and of 2956 Winthrop Road Shaker Heights died of natural causes on Sunday, April 22nd, 2018.
Born on March 28th 1914, Laura's life was first and foremost about her family and a lifelong love of learning.
Growing up in Shaker Heights Ohio, she was the eldest child of Charles and Angelina Curro, founders of Curro Construction. She outlived her brother Thomas Curro and her sister Virginia Curro who passed away two months ago at the age of 100.
Laura graduated from Shaker Heights High School and then attended Flora Stone Mather, which was the original girls college at Case Western Reserve. She attained a degree in Romance Languages. She spoke five languages fluently and used her linguistic talents to teach French, Italian, and Spanish at Collinwood High School and Cleveland State University, and later she taught English in Messina, Italy.
Her life was forever altered when she met her soul mate, Felice Lipari, during her graduate studies in Perugia, Italy. The two of them carried on a storybook love affair that spanned two continents from Sicily to California. They have five children.
While living in Sicily, during World War II, Laura worked as a translator for the American Intelligence providing key information for the Allied troops in their conquest of Italy. Her work there led to commendations for saving American lives.
She worked side by side with her husband starting Richmond Dairy in California and later a Cattle Ranch in Prescott, Arizona. They also built and operated the Corona Raceway.
Felice passed away in 1984, but Laura demonstrated her ingenuity and tenacity by continuing to reinvent herself. She was always a talented raconteur who shared her stories with family. This talent grew into a role as Sunday school teacher where she taught thousands of young people the Bible. Many local clergy at St. Dominic's Church encouraged her to write her stories down and this was the birth of Grandma Shares Her Faith, a series about telling bible stories to Children published originally by Oak Manor Press.
She received national recognition for her books. This encouraged her to continue working as a writer, and she produced a trilogy of historical fiction novels, based on the colorful stories of her in-laws, set primarily in nineteenth century Sicily. The collection of books is under contract with Red Scorpion Press with the first installment due to be published later this year.
She is survived by her five children, John and Charles Lipari, Myriam Mayshark and her partner James McElrath, Vivian Lipari, Tom Lipari and his wife, Gail. Laura is survived by 9 grandchildren, John Lipari and his wife, Angelique, Maria Elena Lipari, Loren Mayshark, Thom Wright, Angela Wright, Angelique Lipari Campbell, Desiree Lipari Barrows, Thomas Lipari and Brie Lipari . She is survived by 13 great grandchildren and 6 great-great grandchildren.
A Funeral Mass will be in The Church of St. Dominic, 19000 Van Aken Blvd., (at Norwood Rd.), Shaker Hts., OH on Friday May 4th at 10 am.

The family will receive friends at the church's foyer, beginning at 930 AM. A reception will follow.

Burial will be in California at the Pierce Brothers' Crestlawn Cemetery with a service in their Chapel on May 9th at 11 AM.

Those who wish may make contributions in Laura's name to the Church of St. Dominic or Our Lady of Lourdes Church, 41 Main St., Bemus Point, NY 14712.