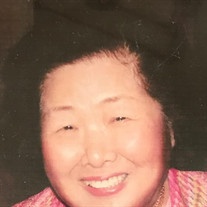 Mrs. Hwang lived in China, HK and the US, connecting and enriching thousands of lives. She lived along the French border of Shanghai and led more than 20 family members to safety during the 1930s civil war. She was a 1944 graduate of Fudan University, a leading university in Shanghai. As one of the first female journalists of her time, she interviewed many leading politicians and colorful characters in China during, and after, WWII.

FUNERAL MASS will be held in The Church of St Dominic, Saturday, January 21st at 10 AM and FRIENDS MAY CALL AT THE CHURCH FRIDAY, JANUARY 20TH FROM 4-8 PM.

Interment will follow the Mass at the Highland Park Cemetery.