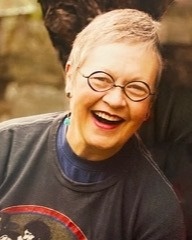 Never one to pass up an adventure, Kim traveled the world enjoying the art and culture of foreign lands. She lived abroad in Italy for a year, studying the language and broadening her horizons. She was a student of political science and enjoyed keeping abreast of foreign affairs as well as politics at home. In her later years, Kim became a collector of African Art and  supported several talented young artists.

Kim was known for her humor, generosity, and intellectual curiosity. She had an effortless style, eclectic library of books, and special place in her heart for her feline friends. She was a lifelong lover and supporter of music and theater, including the Cleveland Symphony Orchestra, Cleveland Institute of Music, and Cinematheque. She was also passionate about art. Kim was active at the Cleveland Museum of Art and Cleveland Institute of Art. She also championed education, specifically Laurel School and Hanna Perkins Center. Kim was active in women’s rights organizations and was politically active in Democratic causes.