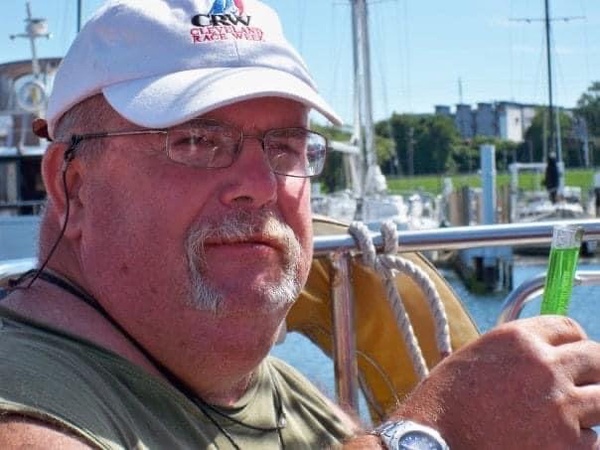 Born in 1951. He is a graduate of Shaker Heights High School (1970), former pool lifeguard, swim coach and Zamboni driver. He studied, occasionally, in between partying at Denison University (1974), and Case Western Reserve University School of Law (1978).

Early on, he worked as a Police Officer in Baltimore, Maryland as well as a Petty Officer in the Coast Guard Reserves. Thereafter, carrying out the duties of Lawyer and professional cynic at Minshall Law Offices. As an attorney he touched many lives and aided many people in their most difficult times.

He is survived by his loving and dutiful wife of 36 years Patricia B. Minshall; father of Halle B. Minshall; brother of Eric Minshall; uncle to Sarah Gartman (Minshall) and Aaron Minshall. He will be missed by his adoring puppy Charlie.

Kent, known to many as "Chip" was an avid and lifelong sailor and sailboat racer, competing in numerous regattas over a long and prolific career. Chip taught many sailors about the joys of sailing, racing, and cursing. He was an active member of Edgewater Yacht Club for more than fifty years where he served as a Trustee. He volunteered as a teacher and mentor with the North Coast Women’s Sailing Association.

Chip was dragged into the ocean by his young daughter to take a SCUBA certification class. Henceforth,  he took much joy in tormenting and teasing the dive staff.

He was integral in bringing the Tall ships to the Port of Cleveland in the early 80’s. He shared his enthusiasm for the water by working with Project YESS to introduce many young Ohioans to the Lake. As a volunteer with Project YESS he did a Great Lakes tour with the students on  the Tall Ship Sorlandet. Where, as a card carrying AARP member, he experienced the true joys of sailor life by sleeping in the hammocks just like the kids.

Chip was an extremely outgoing, charismatic, and loud presence everywhere he went. His interesting sense of humor left an impact on everyone he met. Even more so, his philanthropic nature will be missed deeply by the communities he served. Chip was always one to provide assistance to anyone in need.

Chip’s family invites you to join them for a Celebration of Life. We hope that you will  reminisce and share your favorite Chip stories, with us.  We know that everyone has at least one quintessential Chip story.

The family prefers that in lieu of flowers any who may wish to make a contribution in his name donate to the causes that he passionately supported; Project YESS, c/o The Rotary Club of Cleveland, 377 Lear Road #222, Avon Lake, Ohio 44012   or The House of Mews Rescue houseofmewsrescue.org/donate.html