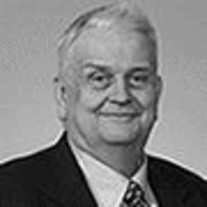 Joseph B. Richey, II, age 79, of Russell Township, OH.  Beloved husband of the late Gayle M. Richey (nee Gleitz); loving father of Joseph B. Richey, III (Wendy) of Bainbridge, Judy Schuster Richey of Brecksville, Laurel Richey-Abbey (Stephen) of Chagrin Falls, and Jonathan B. Richey (Danielle) of Shaker Hts.; dear grandfather of Lisa, Melanie, Mason, Kyle, Caroline, Elle, Rocco, Lorelei, Leo and Hawken.
Mr. Richey was a Director of Invacare Corporation retiring from the board in 2013. He also served as a Director of Steris Corporation, Royal Appliance Manufacturing Co. and Inservco. He was Chairman, President and CEO of NeuroControl Corporation. Mr. Richey was on the Board of Trustees for Case Western Reserve University and the Cleveland Clinic Foundation. He attended Yale University and graduated from Case Institute of Technology.  He was an accomplished alumnus and think[box] benefactor.  Joseph B. " J.B. "Richey II died last week, 54 days after the university dedicated the building that bears his name. He was 79.
Mr. Richey was renowned for developing the first commercially available full-body CAT scan, became one of the first public supporters of Case Western Reserve's innovation hub in 2011. That year he joined with close friend and colleague Mal Mixon to commit $5 million to the structure that would become its home.
J.B. Richey found himself drawn to electronics for as long as he could remember. Starting with extension cords and homemade tape recorders, he advanced to building Hi-Fi sets for college classmates and then a job at Ohio Nuclear, a small company run by a Case Institute of Technology (CIT) professor. It was there that Richey combined his own ingenuity and knowledge with an algorithm provided by a scientist at Bell Labs and the software skills of a CIT doctoral student.
The full-body CAT scan machine quickly drew intense industry interest, particularly because the device worked farmore quickly than any other prototype.  Later renamed Technicare, the firm soon brought in Mixon to help market it.
After Johnson & Johnson acquired the company in 1978, its leaders asked Richey to turn his attention to developing MRI units. He relished the new challenge, yet also found the prospect of partial ownership of a company enticing. He joined with Mixon and other lenders to buy Invacare, then seen as a small, sleepy wheelchair company with a small portion of the market. In 1984, Richey joined the company outright, and quickly found new problems to solve. For example, Invacare's electric wheelchairs still were analog.
In three decades at Invacare, he developed dozens of additional devices and improvements for patients. One of the most revolutionary was a device that allowed oxygen machines to be refilled at home, meaning that users no longer had to be dependent on delivery of new tanks.  The early versions were impressive, but too heavy and expensive to draw many sales.
Over time, Richey and his team continued to refine the machine, ultimately creating a model so popular the company could barely keep up with demand.
There are well over one hundred patents in the medical field registered in his name. Mr. Richey also authored and co-authored several technical publications.
The family prefers that those who wish make contributions in his name to Thinkbox, Case School of Engineering, Richey Mixon Building, 11201 Cedar Ave., Cleveland, OH 44106. A Memorial Service will be held at 2:30 on Friday, December 4th at Fairmount Presbyterian Church, 2757 Fairmount Blvd., Cleveland Hts., OH 44118. Private family Interment, Lake View Cemetery.