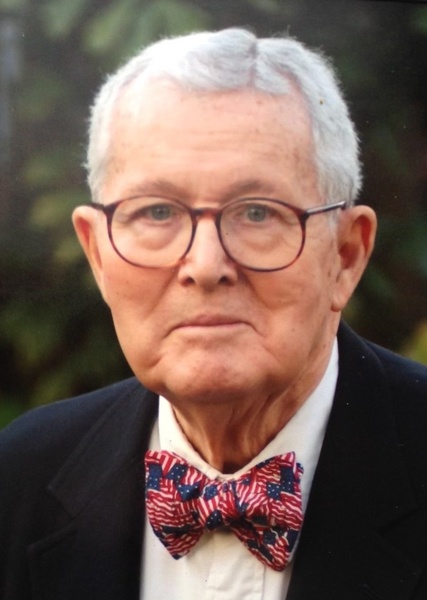 Joseph B. Milgram, Jr., formerly of Cleveland Heights, Ohio and Retired Chairman of the Aexcel Corporation of Mentor, Ohio died on Monday August 1st 2022 at the Hospice of the Western Reserve at the age of 99 ½.

The family said the cause of death was respiratory failure.

Joe Milgram and Margaretta (Sally) Cox were married for fifty-six years and had three sons: John S., Andrew S., and Thomas B..

He was born in Brooklyn, N.Y. and was a Chemical Engineering graduate of Brooklyn Polytechnic Institute. He later earned an MBA Degree from The Wharton School of The University of Pennsylvania.

Aexcel Corporation, of Mentor, Ohio, is a manufacturer of industrial paints, coatings and adhesives.

He came to Cleveland from Philadelphia in 1963 to join Diamond Alkali Company, later Diamond Shamrock, to head a new marketing department, and later was Assistant to the Chairman and Manager of Corporate Planning. Earlier in his career he was employed developing new chemical products at Foote Mineral Company and Pennsalt Company both of Philadelphia. At Foote, he helped develop lithium catalysts used to polymerize synthetic rubber duplicating the structure of natural rubber. There he also directed projects to produce pure silicon for electronics, solid rocket oxidants, and the chemical purification of cabin atmospheres of submarines and space capsules for human life support. He served in the investment-banking group of McDonald and Company and was Vice President of Oglebay Norton Company.

He was active in business groups of the Cleveland community as Vice Chairman of COSE, The Council of Smaller Enterprises, and Trustee of the Greater Cleveland Growth Association. In 1983 as a member of Cleveland Tomorrow he oversaw founding a non-profit organization to assist new small businesses begin operation here, following the plans for the future of Cleveland made at that time. Working with other COSE members, he brought the Center for Venture Development (CVD) into being, with the State of Ohio and the Cleveland and Gund Foundations funding its startup. He served on the Board of Cleveland Tomorrow for ten years as its small business member. CVD was later merged into Case Western Reserve University and renamed Enterprise Development, Inc. (EDI). He remained a Trustee of EDI until July 2000. In the years 1988-1994 he also served as a Trustee of EPIC, the Edison Polymer Innovation Company, another Cleveland Tomorrow initiative.

He was Trustee, Vice Chairman, and Chairman of The Cleveland Institute of Music.

Other posts included the Presidency of Brooks Scientific, Inc., of Cleveland, Directorships of Chemidyne Corporation, of Macedonia, Ohio, Forma Scientific, of Marietta Ohio, Information Specialists of Cleveland, Igo Home Products of Beachwood, Ohio and Execuserve of Shaker Heights. He was a long-time Board member of the National Paint and Coatings Association of Washington D.C.; he received its Industry Statesman award when he retired. He was an emeritus member of the American Chemical Society.

During World War II in 1942 he enlisted as a private in the Army. After graduating from Officer Candidate training at The Engineer School, Ft. Belvoir, Va., he served with The Army Air Force at Geiger Field, Spokane, Washington, and later as First Lieutenant with the 51st Engineer Combat Battalion in Europe. The unit won five battle stars, the Distinguished Presidential Citation, the Croix de Guerre with Silver Star of France, and a memorial plaque at the Engineer School, at Ft. Leonard Wood, Mo., as one of the most distinguished engineer units of World War II. Its seven hundred men held forty miles of the northern flank against the German Sixth SS Panzer Army during the first five days of the Battle of the Bulge. Milgram was awarded the Silver Star Medal for demolishing a key bridge across the Salm River at Trois Ponts, Belgium, while under machine gun fire of the First SS Panzer Division. That defense by 51st Combat Engineers forced the attacking German spearhead commanded by Col. Jochen Peiper to turn away from its planned objectives and made possible its destruction by US Army Air Forces fighter planes at the nearby town of La Gleize when the clouds cleared shortly thereafter. For the 51st Engineers, Peiper coined the epithet “The damned engineers.”

Mr. Milgram was a member of The Rowfant Club, The Cleveland Skating Club, the City Club and the Union Club. He and his wife Margaretta (Sally) were supporters of Cleveland’s musical, theater, and visual arts. After retiring,  he enjoyed travel, fine art photography, fishing, reading and writing. His autobiography is entitled “Reminiscences.”

He is survived by his sons John S. (Laura, MD) and Andrew S. (Cara Cuddy), both of Shaker Heights, Ohio, and Thomas B. (Elizabeth), of Hudson, Ohio; nine grandchildren and three great-grandchildren. His brother Eugene, of Metuchen, New Jersey pre-deceased him.

A recital in Joe’s memory will be scheduled for a later date.

The family prefers that those who wish may make contributions to an organization of their choice.